A US congressman has called for a war against “Islamic horror” in response to the attacks in London over the weekend that claimed the lives of seven and wounded 48.

Clay Higgins, Republican representative of Louisiana’s third congressional district and volunteer law enforcement officer, said in a social media post on Sunday the “free world … all of Christendom … is at war” with “radicalized Islamic suspect[s]”. He finished the post with “Kill them all”.

The comments caused concern with many advocacy groups calling on Monday for Higgins to measure his words.

“Congressman Higgins’ comments on social media do nothing but fan the flames of anti-Muslim rhetoric, which have reached a fever pitch following the 2016 election,” Heidi Beirich, director of Southern Poverty Law Center‘s Intelligence Project, which monitors hate groups in the US, told Al Jazeera via email.

“Words have consequences and, in a time where hate crimes against Muslims are up 67 percent, our elected officials need to be issuing statements of unity and not vilification,” she said.

CAIR’s government affairs director Robert McCaw said he wanted clarification on whom exactly Higgins believes Christendom is at war. “Is he referring to criminal terrorist groups … or is he including all Muslims in that statement?”

McCaw echoed Beirich’s concern that these comments can be dangerous as the US is living in a “climate of hate. A white supremacist killed two men and wounded another who were defending two Muslim teenagers just last week,” he noted.

The remarks reference an attack in Portland at the end of May. White supremacist Jeremy Joseph Christian, 35, allegedly stabbed three men who defended two female Muslims ages 16 and 17 while on public transportation.

Christian considers himself a defender of free speech and has been seen at rallies in support of President Donald Trump, who has repeatedly attempted to institute a travel ban on six predominately Muslim nations.

McCaw said CAIR plans to send Higgins a letter regarding these concerns.

The post was met controversy not only from advocacy groups, but also Higgins’ constituents.

Kayla Cooley of Lake Charles, Louisiana, called the remarks “unacceptable … I do not support this racist, terrorist rhetoric,” she said. Others supported the congressman’s remarks.

Higgins’ office did not immediately respond to Al Jazeera’s request for comment. 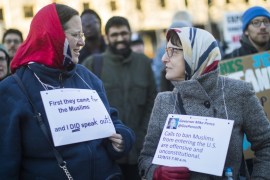 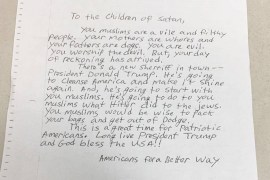 CAIR considers asking FBI to investigate letters saying “You Muslims would be wise to pack your bags and get out”.