Hundreds of civilians hoping to flee fighting in the besieged Philippines city of Marawi remained trapped on Sunday after a four-hour ceasefire to evacuate residents was marred by gunfire.

Authorities said they had finally been able to negotiate a truce with fighters linked to the Islamic State of Iraq and the Levant (ISIL, also known as ISIS), but continued clashes throughout the morning meant it was not put into place as expected.

At least 134 people are believed to have been rescued.

But by 9am, gunfire had broken out, deterring residents from joining a mass exodus.

Local authorities said government officials, working through intermediaries, had reached agreement with the fighters to observe the four-hour ceasefire and let the trapped civilians leave.

But the officials failed to secure agreement from their own military for the truce, provincial crisis management committee spokesman Zia Alonto Adiong told the AFP news agency.

He said the military only allowed rescuers to access areas on the fringes of zones held by the fighters, and barred them from entering bombed-out city blocks.

As a result only some 170-plus trapped residents were led to safety on Sunday, according to the military. Speaking to the Reuters news agency, a presidential spokesman put the number of those who were evacuated at 134.

“We felt a bit disappointed and betrayed. We’re talking about lives of people, my God!” Adiong said.

The battle for Marawi, a city on Mindanao island, began almost two weeks ago and prompted Duterte to declare martial law in the southern region.

Authorities lifted the civilian death toll from 20 to 38 on Sunday – but said all those deaths were caused by the separatist fighters.

A presidential spokesman said 120 fighters had died, along with 38 government forces.

Government forces have bombarded Marawi with air raids and waged fierce street-to-street battles with hundreds of gunmen since they rampaged through the Muslim city of 200,000 on May 23 after the military attempted to arrest their leader, Isnilon Hapilon.

Scores of people made a daring dash for safety on Saturday, including one of Marawi‘s most respected politicians who had hidden 71 Christians in his home and led 144 people through downtown streets strewn with rotting corpses.

Duterte said the use of air power had been restrained so far. 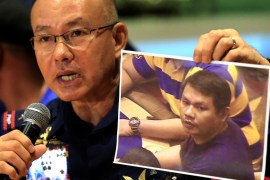 No political motive behind attack on Manila casino in which 37 people, including the gunman, died, police say. 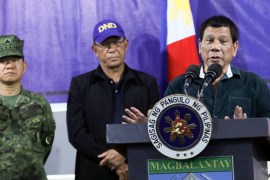 Philippines president reassures soldiers who might be accused of committing abuses under Mindanao island martial law.