Thousands of people have taken the streets across Morocco’s northern Rif region for an eighth night demanding the release of a prominent protest movement leader.

Nasser Zefzafi, the head of the grassroots Al-Hirak al-Shaabi, or Popular Movement, was taken into custody on Monday and transferred to Casablanca.

Thousands rallied in the port city of al-Hoceima on Friday for a eighth straight night where a strike has seen nearly all of the shops in the city centre shuttered.

Protests also gripped the town of Imzouren, where scores of protesters clashed with policemen after Friday prayers.

“The whole Rif believes in freedom and humanity and in social justice,” said Cilia Ziani, one of the two women who inherited the leadership of the Hirak movement after Zefzafi was jailed.

“If you imprison our leaders, we will resist until our demands are granted,” she added.

Al-Hoceima, a city of 56,000 inhabitants, is in the neglected Rif region, and has long had a tense relationship with Morocco’s central authorities.

“The people are convinced that a solution to this injustice, to the suppression, is needed,” Nawal Benissa, a member of Hirak, told Al Jazeera.

“The Rif is bleeding.”

While some anger in the Al Hoceima protests has been directed at “Makhzen” – the royal governing establishment, the demonstrations in northern Morocco, as in pro-democracies rallies in 2011, have not been directed at King Mohammed VI.

“The doors to dialogue remain open with civil society,” government spokesman Mustafa el-Khalfi was quoted as saying by the official MAP news agency.

Celeste Hicks, a freelance journalist reporting from Casablanca, told Al Jazeera that the protests stemmed from the death of Mouhcine Fikri, a 31-year-old who was crushed in a rubbish truck in October as he protested against the seizure of swordfish caught out of season.

“The protests have been going on in various shapes and sizes for a seven months now, but it’s not really clear what’s going to happen next,” she said.

“The government has tried to send a delegation to meet the leaders of the movement but they have not been able to meet any.”

Calls for justice for Fikri evolved into a grassroots movement demanding jobs and economic development, with Zefzafi, himself unemployed, emerging as the leader of Hirak.

Zefzafi was detained along with others on Monday for “attacking internal security”, after a warrant for his arrest issued last Friday.

READ MORE: What is fuelling unrest in the Rif?

After going on the run for three days, he was taken into custody on Monday “along with other individuals”.

Out of around 40 people who were reported arrested last week, including core members of Hirak, 25 have been referred to the prosecution.

Their trial began on Tuesday but was pushed back to June 6 at the request of their lawyers, who have complained their clients were ill-treated during their detention.

Seven suspects were released on bail and another seven were freed without charge. 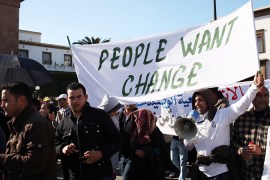 Morocco: What is fuelling unrest in the Rif?

An overview of protests in Morocco, from the Arab Spring to Mouhcine Fikri’s death to Nasser Zefzafi’s arrest. 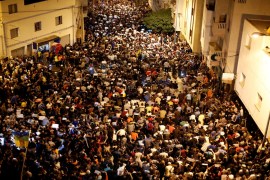 Demonstrations were held in the northern Rif region to demand the release of leader of the ‘Popular Movement’.