Helicopters are searching for people marooned four days after the worst floods and mudslides to hit Sri Lanka in 14 years overcame parts of the country’s southwest, killing at least 164 people.

With more rain expected on Monday, rescuers were racing to evacuate villagers from the most vulnerable areas as emergency teams rushed to distribute aid to nearly half a million people driven from their homes by the island’s worst flooding in a decade.

Some 104 people were still listed as missing, the country’s Disaster Management Centre said on Monday, while another 88 remained in hospital.

The army said it does not expect to find any more survivors.

“With bad weather set to continue, there are concerns that the situation will worsen,” said a spokesman with the International Federation of Red Cross and Red Crescent Societies, adding that according to the government, at least 470,000 people are affected.

The army has deployed a dozen aircraft for the evacuation effort and to carry food and other essentials to affected areas.

Al Jazeera’s Minelle Fernandez, reporting from one of the worst hit areas – Kalutara, south of the capital, Colombo – said some villages in the hilly interior were still inaccessible, while others were yet to receive any aid.

“The water levels are still quite high,” she said. “There are villages that are still locked by water … with people desperately trying to get out and get supplies.

“People in better situations have been coming together, cooking food in community kitchens.”

The government has appealed for bottled water, new clothes and dry rations for those displaced.

India sent two naval ships laden with supplies over the weekend, while the UN said it would donate water containers, water purification tablets and tarpaulin sheets.

The World Health Organization said it would support medical teams in affected areas.

Al Jazeera’s Charles Stratford, reporting from an airbase in Colombo where relief efforts are continuing, said: “We flew over some of the worst affected areas today. Families are trapped, whole villages are completely cut off and in need of medical support, food, clothing and shelter.

“Many people were swept away when the sides of mountains collapsed on their homes.”

“At present, the most immediate needs are water, food, and sanitation and hygiene kits. It should be noted that women and children are particularly affected by this disaster,” he told Al Jazeera.

“As soon as the water starts receding, an immediate cleaning operation needs to take place to prevent mosquito breeding and the spread of dengue.”

He said cholera and diarrhoea had been successfully prevented in past floods.

“We have the expertise to deal with this situation,” he told the AFP news agency.

The flooding is the worst since May 2003 when 250 people were killed and 10,000 homes destroyed after a similarly powerful monsoon, officials said. 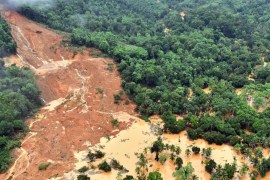 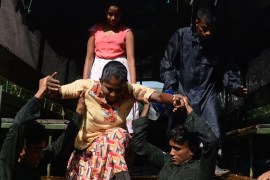