Muslims in Portland thanked the community for its support as they raised money for the victims of a deadly attack on a train by an Islamophobic white supremacist.

On Friday, Jeremy Joseph Christian – a 35-year-old who was known to authorities – fatally slit the throats of 53-year-old Ricky John Best and Taliesin Myrddin Namkai Meche, 23, after they stepped in to defend two girls Christian was bullying.

One of the girls is Muslim and was wearing the hijab.

A third victim, 21-year-old Micah David-Cole Fletcher, was also stabbed in the attack.

Fletcher – who in 2013 performed a poem condemning Islamophobia – is in serious condition in hospital, but expected to survive.

Friends of Micah Fletcher, who survived knife attack on MAX train Friday , posted this on a gofundme site to raise money for his recovery: pic.twitter.com/FL2trDw0hX

The two young women “could have been the victims, but three heroes jumped in and supported them”, he said.

Destinee Mangum, one of the girls Christian was abusing, told Fox 12 Oregon KPTV: “I just want to say thank you to the people that put their life on the line for me. They lost their lives because of me and my friend, and the way we looked.”

Destinee Mangum, one of the targets of hate speech on a MAX train, thanks strangers for saving her life. pic.twitter.com/sefmOAyIVt

Crying as her voice shook, she added: “I appreciate them. Without them, we probably would be dead right now.”

A fundraising page launched by Najieb’s group for the families of the victims, including the two young women, had raised $50,000 in its first hours.

In total, various pages have raised almost one million dollars for the victims and their families.

Anti-Muslim march to go ahead

On April 29, local reporter Mike Bivins filmed Christian at a march by the far right.

In the footage, Christian was draped in an American Revolutionary War flag and could be seen performing a Nazi salute and heard shouting “Die Muslims. Die fake Christians. Die Jews”, as police watched on.

Joey Gibson, who organised that rally, is behind two marches planned for June 4 and 10. The former is a “free speech” rally and the latter an anti-Sharia march.

While there was solidarity in the Oregon city, there were concerns of more unrest ahead of Gibson’s “Portland march against Sharia”.

Similar rallies, held under the guise of free speech, are widely believed to be fascist in nature.

“We gotta come together,” said organiser Joey Gibson, in a video posted to his Facebook page, of the June 4 event. “We need to stand up for what we believe in.”

Gibson distanced himself from Christian in the clip, but urged his followers to pray for the suspect.

Police said they will examine what appears to be the extremist ideology of Christian, whose social media postings indicate an affinity for Nazis and political violence.

The attack occurred on a light-rail train on the first day of Ramadan, the holiest time of the year for Muslims.

Christian was being held on suspicion of aggravated murder, attempted murder, intimidation and being a felon in possession of a weapon.

He was arrested a short time after the attack when he was confronted by other men, and will face court on Tuesday.

The FBI said it is too early to say whether the slayings qualify as a federal hate crime. However, Christian faces intimidation charges, the state equivalent of a hate crime.

Court records show Christian served prison time for first-degree robbery and second-degree kidnapping after a crime committed 15 years ago, when he was 20, and theft and weapons charges were dismissed in 2010.

Several social media users questioned why Donald Trump, US president, and other Republicans had not addressed events in Portland. Here are some examples:

.@realDonaldTrump I'm a reporter in Portland. Do you have a comment about what happened here Friday night? Thanks.

Trump tweeted 2x today celebrating a candidate that assaulted a journalist but has said nothing yet about the 2 heroes murdered in Portland.

Dan Rather's open letter to POTUS urging him to take notice of the two heroes that were killed by a racist/Islamaphobic man in Portland. pic.twitter.com/jUXUHn7fen

So did Donald Trump.

White supremacists killed #RichardCollins. Now two men killed in Portland. Trump has done NOTHING to stop them. Instead, he's enabling them.

Trump still hasn't acknowledged the terrorist attack in Portland nor the hate-killing of 2LT Collins in Maryland. Leadership? Compassion? 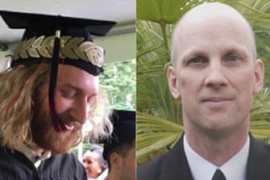 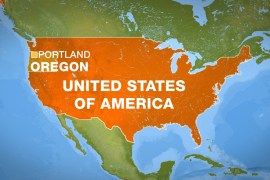