At least 20 policemen were killed in Taliban ambushes in southern Afghanistan, officials said, as security forces sought to dislodge fighters in multiple districts.

Fighting is ongoing in Zabul province, where the police were attacked in Shah Joi district, provincial governor Bismullah Afghanmal said on Sunday. He said the Taliban had ambushed police in the areas of Chino and Ghulam Rabat.

“The report we have right now indicates that 20 policemen are martyred and 10 others are wounded. The number may increase,” Afghanmal told the Reuters news agency.

Dozens of Taliban, who have been waging a 16-year-long battle against the Western-backed government in Kabul, were also reported killed and wounded, Afghanmal said.

Reinforcements sent to the area where the police had been ambushed were also attacked, said Gul Islam Seyal, a spokesman for the Zabul governor.

WATCH: Can the Taliban in Afghanistan be defeated?

Fighting was also ongoing in Zabul’s Dai Chopan district, but the extent of casualties was unknown, Afghanmal said.

In neighbouring Ghazni province, Taliban fighters launched a three-pronged attack on parts of the provincial capital on Friday, driving a Humvee packed with explosives into the entrance of a district governor’s compound during the assault.

Separately on Sunday, the Taliban claimed responsibility for a deadly attack on Saturday on a bank in Paktia province, which left at least six people dead, including three attackers.

Taliban fighters launched their annual “spring offensive” in late April, heralding a surge in fighting as the US tries to craft a new Afghan strategy and NATO considers sending more troops to break the stalemate against the resurgent fighters.

Meanwhile, a German aid worker and an Afghan guard were killed and a Finnish woman kidnapped as armed men stormed an international guesthouse in central Kabul, officials said on Sunday.

No group has so far claimed responsibility for the attack late on Saturday on the guesthouse run by Swedish charity Operation Mercy.

“A Finnish lady was kidnapped from police district (three) last night at 11.30. A German lady and an Afghan guard were killed,” interior ministry spokesman Najib Danish said on Twitter.

The kidnapping of foreigners has been on the rise, but the threat of abductions is even greater for Afghans.

Kabul is plagued by criminal gangs who stage abductions for ransom, often targeting foreigners and wealthy locals, and sometimes handing them over to armed groups.

No group has so far claimed responsibility but authorities in Logar province blamed the Taliban for the killings. 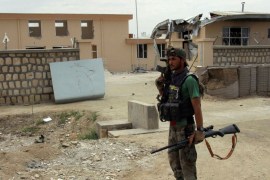