Parents of the Chibok girls released by Boko Haram earlier this month were reunited with their daughters on Saturday in the Nigerian capital Abuja.

There were emotional scenes at the reunion ceremony with fathers gripping their daughters in tight hugs, while mothers shrieked with joy, wiping away tears streaming from their eyes.

One beaming father picked up his daughter and swung her around in the air.

They hadn’t seen each other since April 2014, when fighters from the armed group snatched more than 200 schoolgirls from their dormitories in northeast Nigeria.

“I’m feeling very happy. I was dancing with her, she’s very happy,” said Yakubu Nkeki, whose niece Maimuna – whom he has raised as his own child – was among the 82 released.

“All of us had lost hope. We thought the girls would not be returned.” Nkeki added.

Nkeki, who represents the Chibok parents, said that they would attend a church service with the girls on Sunday, before returning home early next week.

Nigeria’s minister for women Aisha Alhassan has said that the government’s goal is to have all the rescued Chibok girls back in school by September.

But the Nigerian government has been criticised for keeping the girls in their custody and limiting access to their parents.

“Authorities should clarify to families whether the rescued girls are being held in preventive detention or as criminal suspects,” Human Rights Watch said in a statement earlier this month.

The human rights organisation added that the Nigerian government should also be working to secure the release of others kidnapped by Boko Haram.

“While the Chibok girls are the highest profile victims of Boko Haram’s abductions, authorities should extend the negotiations for release to other missing adults and children,” it said.

Boko Haram has used kidnapping as a weapon of war, seizing hundreds of women and young girls in its quest to create an Islamic state in northeast Nigeria.

The group seized 276 girls from the remote town of Chibok in April 2014, triggering global condemnation and drawing attention to the bloody insurgency decimating the region.

In the immediate aftermath of the kidnapping, 57 girls managed to escape. Of the 219 who did not manage to flee, 106 have either been released or found.

The group of 82 girls was released in May in exchange for five Boko Haram commanders following months of negotiations brokered by the Swiss government and the International Committee of the Red Cross.

Twenty-one of their classmates were freed in October last year, while three others had previously been found or escaped.

The Nigerian government has said it is still in talks to release the remaining 113 girls in captivity.

Since the time of the Chibok kidnapping in 2014, Boko Haram has lost significant swaths of territory to the Nigerian government.

But the armed group still poses a threat to the ravaged region, which is suffering from a food crisis as a result of the eight-year insurgency which has left at least 20,000 people dead and displaced more than 2.6 million from their homes. 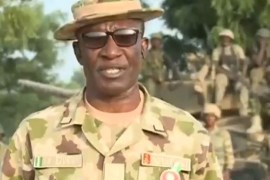 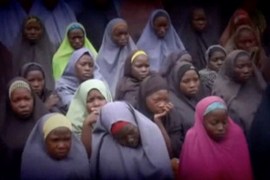 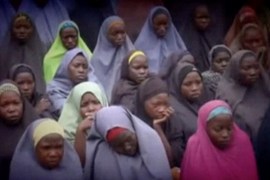 Army wants to question journalist and two others after release of video purporting to show kidnapped Chibok girls.