Venezuelan opposition leader Henrique Capriles said on Thursday that authorities confiscated his passport and prevented him from travelling to New York to discuss the country’s crisis with United Nations officials.

More than six weeks of anti-government unrest have resulted in at least 44 deaths as well as hundreds of injuries and arrests amid a worsening political and economic situation.

“I have not been able to travel. I will not be able to attend the meeting with the [UN] High Commissioner for Human Rights,” Capriles, Maduro’s most prominent opponent, said in a video posted online.

Anti-government demonstrators have been on the streets daily since early April to press for elections, blaming Maduro for an economic crisis that has caused severe shortages of food and medicine.

Capriles, 44, had intended to brief the high commissioner Zeid Ra’ad Al Hussein on the deadly violence. Deaths have occurred on both sides.

Zeid reacted on the Twitter account belonging to the United Nations High Commissioner for Refugees:”I was hoping to see @hcapriles @UN and to hearing his views on #Venezuela. I regret he was unable to travel,” Zeid said.

“Hope @hcapriles passport removal is not reprisal linked to planned meeting with me tomorrow.”

Security forces blocked thousands of demonstrators from advancing along a major highway towards the interior and justice ministries.

The government and the opposition have accused each other of sending armed groups to sow violence in the protests.

Police have blocked marches with tear gas, pepper spray and water cannons, while protesters have hurled rocks and Molotov cocktails, vandalised property, and started fires in a near-daily series of clashes.

Venezuela‘s government on Thursday said it was deploying more than 2,500 troops in the western border province of Tachira to quell a spate of looting and deadly rioting.

Separately, the United States convened a meeting of the UN Security Council on Venezuela on Wednesday. It warned the crisis was worsening and could escalate into a civil conflict.

Venezuela’s Foreign Minister Delcy Rodriguez responded on Twitter by repeating Maduro’s allegation that Washington was out to topple his government.

Speaking to reporters during a joint press conference with Colombia’s leader Juan Manuel Santos, US President Donald Trump called the situation in Venezuela a “disgrace to humanity” and said the crisis was possibly the worst of its kind in “decades”. 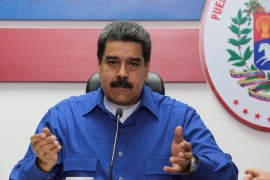 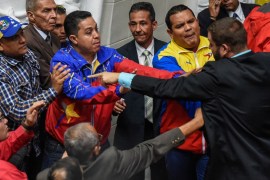