North Korea has fired a ballistic missile that flew 700km, South Korea’s military said, days after a new leader took office in Seoul pledging to engage in dialogue with Pyongyang.

The missile was fired early on Sunday from the region of Kusong, northwest of Pyongyang, where North Korea in February successfully test-launched an intermediate-range missile that it is believed to be developing.

China called for restraint and for no party to do anything to exacerbate tension following the test.

“At present the situation on the peninsula is complex and sensitive, and all relevant parties should exercise restraint and do nothing to further worsen regional tensions.”

Japan said the latest missile reached an altitude of more than 2,000km and flew for 30 minutes before dropping into the sea between North Korea’s east coast and Japan.

The North has consistently test-fired missiles in that direction.

The US Pacific Command said it was assessing the type of missile but it was “not consistent with an intercontinental ballistic missile”.

“US Pacific Command is fully committed to working closely with our Republic of Korea and Japanese allies to maintain security,” a spokesperson said, referring to South Korea by its official name.

“The president said while South Korea remains open to the possibility of dialogue with North Korea, it is only possible when the North shows a change in attitude,” Yoon Young-chan, Moon’s press secretary, said at a briefing.

Moon won Tuesday’s election on a platform of a moderate approach to North Korea and has said he would be willing to go to Pyongyang under the right circumstances, arguing that dialogue must be used in parallel with sanctions to resolve its neighbour’s defiance of the international community.

David Wright, co-director of the Global Security Programme at the Union of Concerned Scientists, said the flight indicates that the missile could have a range of 4,500km if flown on a standard, instead of a lofted, trajectory; that would be considerably longer than Pyongyang’s current missiles.

Japanese Prime Minister Shinzo Abe told reporters on Sunday that North Korea’s repeated missile launches are a “grave threat to our country and a clear violation of UN resolutions”.

Abe said Japan will stay in close touch with the US and South Korea.

Japan Chief Cabinet Secretary Yoshihide Suga declined to comment when he was asked whether the latest missile launch was a success, and whether it represented a new level of threat.

North Korea launched the Pukguksong-2 missile, an upgraded, extended-range version of its submarine-launched ballistic missile, from the same Kusong site on February 12.

South Korean and US military officials said the February launch was a significant development as it successfully tested a solid-fuel engine from a mobile launcher. The missile flew about 500km with an altitude of 550 km.

It represented a more significant threat because of the difficulty of tracking a mobile launcher and because of the ability to keep the missile fuelled in advance, unlike liquid fuel rockets.

The North attempted but failed to test-launch ballistic missiles four consecutive times in the past two months but has conducted a variety of missile tests since the beginning of last year at an unprecedented pace.

US President Donald Trump warned in an interview with Reuters news agency in late April that a “major, major conflict” with the North was possible, but he would prefer a diplomatic outcome to the dispute over its nuclear and missile programmes.

On Saturday, a senior North Korean diplomat who is a veteran member of its nuclear negotiating team, said the country was open to dialogue with the Trump administration under the right conditions, without elaborating.

Choe Son Hui, North Korea’s foreign ministry director general for US affairs, spoke to reporters while in transit in Beijing after attending a conference with former US officials in Norway.

The North’s state media said on Saturday the nation will bolster its nuclear capability unless the United States abandons its hostile policy.

“The United States should never expect us to give up our nuclear capability,” the main Rodong newspaper said in a commentary carried by the Korean Central News Agency.

It said Trump’s “maximum pressure and engagement” policy is only aimed at “stifling us” and will compel the North to “strengthen our nuclear deterrent at the maximum speed”.

South Korea, the US and other regional powers have been stepping up efforts to diffuse tensions over the North’s weapons programme after a sharp rise in tensions in April over concerns that it may conduct a sixth nuclear test.

North Korea has briefly reported on Moon’s election win and said conservatives in South Korea should be thrown out for good for inciting confrontation between the rival states. 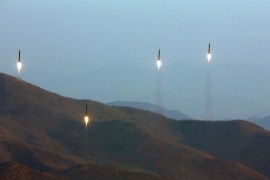 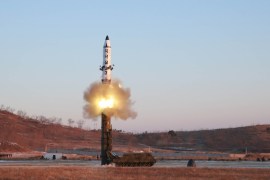