At least 24 people have been killed and 10 wounded when a bus carrying Turkish tourists crashed near the southwestern holiday town of Marmaris, local authorities said on Saturday.

Television footage from the scene in western Mugla province showed a yellow bus lying on its side surrounded by ambulances.

Authorities said the tour bus topped over, fell 15 metres down a cliff and hit a car on a mountain road.

The local deputy governor told state-run Anadolu Agency that the driver is among the dead and most of those killed were women.

Mugla Governor Amir Cicek said the bus “most probably” suffered a brake failure and officials would look into the details.

Anadolu Agency also said the bus was in a convoy of six, carrying mostly women and children for a Mother’s Day event. It was travelling from the western city of Izmir.

President Recep Tayyip Erdogan, in a written statement, offered condolences to the families of the victims and wished a speedy recovery to the injured. 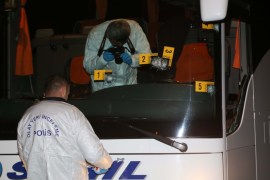 Driver injured in attack on Fenerbahce’s bus which sports minister condemned as “cowardly and barbaric”.