Turkey’s top officials have sharply criticised a decision by the United States to arm Kurdish fighters battling ISIL (also known as ISIS) in Syria – with Washington responding that it will address Ankara’s security concerns.

Dana White, the Pentagon’s chief spokeswoman, said in a written statement on Tuesday that President   Donald Trump decided to “equip Kurdish elements of the Syrian Democratic Forces (SDF) as necessary to ensure a clear victory” against ISIL in Raqqa, the group’s self-declared capital in Syria.

Turkey views the Kurdish Peoples’ Protection Units (YPG), a central part of SDF, as the Syrian extension of the outlawed Kurdistan Workers’ Party (PKK), which has fought the state in the south-east of Turkey since 1984 and is considered a “terrorist group” by the US and EU.

Turkish President  Recep Tayyip Erdogan said on Wednesday that he hoped the decision will be changed by the time he visits Washington for talks with Trump next week.

“I hope very much that this mistake will be reversed immediately,” Erdogan said.

“I will personally express our worries in a detailed way when we talk with President Trump on May 16,” he added, saying the issue would also be discussed at the NATO summit in Brussels on May 25.

Prime Minister Binali Yildirim said earlier on the same day that he could not imagine the US having to choose between Turkey’s strategic partnership and a “terrorist organisation”.

“The US administration still has chances to consider Turkey’s sensitivities on the PKK. If there is a decision otherwise, this will surely have consequences and will yield a negative result for the US as well,” Yildirim said, speaking at a news conference in Ankara before departing for London.

Every weapon obtained by the Syrian Kurdish YPG fighters constitutes a threat to Turkey, Turkish Foreign Minister Mevlut Cavusoglu said, reiterating Ankara’s opposition to the US deal to arm the Kurdish fighters.

In response to Turkish remarks, US Defence Secretary Jim Mattis said he was confident Washington would be able to resolve tensions with Turkey over the issue.

“We’ll work out any of the concerns … We will work very closely with Turkey in support of their security on their southern border. It’s Europe’s southern border, and we’ll stay closely connected,” Mattis told reporters during a visit to Lithuania.

His comments came a day after Sean Spicer, the White House press secretary, said that the US wants to reassure the people and government of Turkey that it is committed to preventing additional security risks and protecting its NATO ally.

Al Jazeera’s Charles Stratford, reporting from Gaziantep on the Turkey-Syria border, said the announcement of the YPG’s direct arming was “at the heart of Turkey’s security concerns” – not only in Syria but also in Turkey.

“Turkey has long considered the YPG the strongest Kurdish fighting force in Syria along that northern border to be affiliated with a terrorist organisation,” he said.

“Last year, Turkey’s operation Euphrates Shield was not only targeting ISIL positions in that area but was aimed at weakening Kurdish forces along that border.”

Air Force Colonel John Dorrian, spokesman for the US-led coalition’s Operation Inherent Resolve (OIR), promised that all arms provided to the YPG would only be used against ISIL.

Every single one of these weapons that will be provided to our partner forces will be accounted for and pointed at #ISIS. #defeatDaesh

The SDF was founded in Syria’s mainly Kurdish northeastern region in October 2015 and is made up of at least 15 armed factions, mostly from the YPG and the Free Syrian Army.

One faction, Ghadab al-Furat launched a campaign in October 2016 to retake Raqqa. Last week it said it had taken 90 percent of Tabqa city in Raqqa province.

For its part, the YPG praised on Wednesday the “historic” US decision to arm its fighters battling ISIL and said it expected to play a stronger and more influential role in what it called the fight against “terrorism”.

“We believe that from now on and after this historic decision, [the YPG] will play a stronger, more influential and more decisive role in combating terrorism at a fast pace,” Redur Xelil, YPG spokesperson, said in a written statement.

“This rightful decision to arm our units shows the falsity of all false allegations were spread against our units and forces to distort their image and to diminish the importance of their role in the fight against terrorism,” she said. 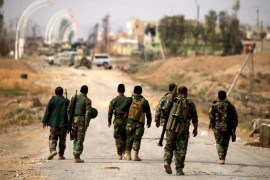