Cambodia’s prime minister has warned the opposition that he will crack down on post-election protests should they turn violent.

The strong language has raised fears that unrest could grip the Southeast Asian country if next month’s local election results are contested by the opposition.

He told a gathering of former soldiers that protests of a similar nature would not be tolerated.

“Remember in 2017 and 2018 elections, if your group indulges in such activities again, armed forces will crack down on them immediately,” Hun Sen said.

Since then, it has ignored opposition demands for an investigation into the election.

“It might work as Cambodians are still scarred by decades of war and violence. It won’t work as well with the young people who were born after the war days,” he said.

“There is too much at stake if any war or serious violence takes place. No one seems to want any of this.”

Cambodians will be casting their votes in local elections on June 4 and a national election is scheduled for July next year.

Sam Rainsy, Cambodia’s self-exiled opposition leader, resigned from the CNRP in 2015 in response to plans by Hun Sen to amend political party laws that bar convicted officials from running.

Sam Rainsy was convicted of defamation by a Phnom Penh court, a charge his supporters say was politically motivated.

READ: Thousands of Cambodians call on PM to quit

Kem Sokha, his deputy, who has been serving as the acting leader is expected to guide the party for local communal elections in June.

Hun Sen, a former army soldier took office in 1985, when Cambodia was emerging from the devastation of the Khmer Rouge. The regime was responsible for the deaths of up to two million Cambodians.

He has ruled the country for nearly 32 years, amassing extensive control over its judicial system, security forces and economy.

Under his rule, Cambodia has transformed into one of Southeast Asia’s fastest growing economies but human rights violations persist. 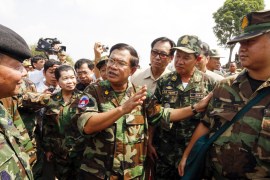 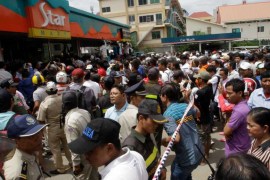