Many European leaders are voicing relief after pro-EU centrist Emmanuel Macron decisively won Sunday’s French presidential election against Marine Le Pen, the far-right nationalist who had threatened to pull France out of the European Union.

Macron’s emphatic victory – he won around 66 percent compared with Le Pen’s 34 percent – has brought relief to European allies who feared another populist upheaval to follow Britain’s vote to quit the EU and Donald Trump’s election as US president.

Al Jazeera’s Dominic Kane, reporting from Berlin on Monday, said there is “palpable relief” in Germany now that Macron has won.

Steffen Seibert, Angela Merkel’s spokesman, said on Twitter: “Congratulations, @EmmanuelMacron. Your victory is a victory for a strong and united Europe and for French-German friendship.”

Our correspondent said that attention will turn to looming problems, including ensuring the smooth exit of the UK from the EU.

“Clearly there are many challenges for this important relationship that exists at the heart of the EU,” he said.

“The Paris-Berlin axis, as it were, is the one that has driven the European Union forward for decades.”

Donald Tusk, EU Council president, also offered his congratulations, saying the French had chosen “liberty, equality and fraternity” and “said no to the tyranny of fake news”.

For his part, Antonio Tajani, European Parliament president, told AFP “we have received a vote of confidence from France in the European Union”.

I warmly congratulate @EmmanuelMacron on his success and look forward to working with him on a wide range of shared priorities.

“The prime minister warmly congratulates President-elect Macron on his election success. France is one of our closest allies and we look forward to working with the new President on a wide range of shared priorities,” said a Downing Street spokesperson.

He said May discussed Brexit with Macron, saying: “The UK wants a strong partnership with a secure and prosperous EU once we leave.”

By contrast, Nigel Farage, former leader of British anti-EU party UKIP, who backed Le Pen, said on Twitter: “A giant deceit has been voted for today. Macron will be Juncker’s puppet.”

US President Donald Trump – who had said he thought Marine Le Pen was the “strongest” candidate before the first round of elections – also communicated his congratulations to Macron via Twitter.

Congratulations to Emmanuel Macron on his big win today as the next President of France. I look very much forward to working with him!

Russian President Vladimir Putin on Monday urged French election winner Emmanuel Macron to bridge deep rifts and work together in the face of the “growing threat of terrorism and violent extremism”.

“The citizens of France entrusted you to lead the country in a difficult period for Europe and for the entire world community. The growing threat of terrorism and violent extremism is accompanied by an escalation of local conflicts and the destabilisation of entire regions,” Putin said in a congratulatory message released by the Kremlin.

“In these conditions it is especially important to overcome mutual distrust and join forces to ensure international stability and security.”

The Kremlin was widely seen as backing Le Pen, with Putin hosting her during a surprise visit to Moscow in the run-up to the vote.

Adding to the tensions, alleged cyberattacks on Macron’s campaign were linked to Russia and his supporters accused Russian state media of trying to smear the candidate. 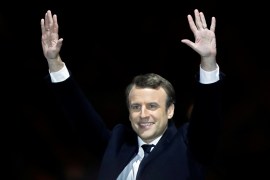 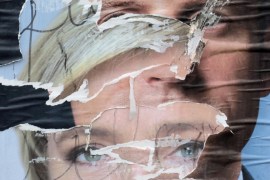 France: Who are Emmanuel Macron and Marine Le Pen?

French voters will choose between two radically different candidates to lead their country.