Karachi, Pakistan – Pakistan has hanged four men convicted by military courts for being members of the Pakistan Taliban (known by the acronym TTP), the military said.

The four civilians – Barkat Ali, Muhammad Adil, Ishaq Hai and Latif-ur-Rehman – were executed on Wednesday, according to a statement from the military’s press wing.

Pakistan introduced military courts for civilian “terrorism” suspects in the aftermath of the 2014 massacre of 152 people, mostly children, at an army-run school in the northwestern city of Peshawar.

The courts were initially introduced for a period of two years but were renewed for a further two years in March by Pakistan’s parliament. They will now expire in January 2019.

So far, Pakistan’s military has convicted at least 304 civilians in cases related to “terrorism”. Of those, 191 have been sentenced to death, while 113 face prison terms of various lengths.

There have been no acquittals, the military said.

In 140 cases, the military did not release any information on the trials, including the name of convicts, the crimes they were accused of or, in cases of imprisonment, how long the terms of punishment were.

In cases where the military has released information on convicts, it reported that 94.5 percent were sentenced on the basis of confessions.

All four men hanged on Wednesday confessed to having been involved in attacks on law enforcement officers and security personnel, the military said.

Their executions bring the total number of civilians tried by the military courts to have been executed to 32, according to the military’s press wing.

Rights groups have expressed concerns that the military trials, conducted in secret, do not meet international fair trial standards.

Lawyers and family members of the accused, in interviews and appeals lodged in civilian courts following the convictions, have alleged their relatives were coerced into confessing and were not given access to lawyers of their choice, or to the evidence being used against them.

In March, politicians lobbied to have additional protections built into the constitutional amendment, which renewed the mandate of military courts, particularly on rules of evidence and the right to a lawyer – civilian or military – of the suspect’s choice.

In August 2016, in a landmark judgment, the Supreme Court rejected 16 such appeals, all alleging fundamental rights abuses, adjudicating that fundamental constitutional rights did not apply to those being tried by military tribunals. 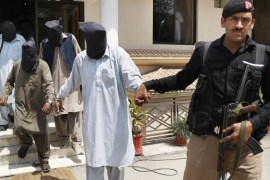