China’s President Xi Jinping has called for restraint when dealing with North Korea during a telephone call with US President Donald Trump, according to Chinese state media.

The official broadcaster CCTV quoted Xi on Monday as telling Trump that China strongly opposed North Korea’s nuclear weapons programme, which is in violation of UN Council resolutions, and hoped “all parties will exercise restraint and avoid aggravating the situation” on the Korean Peninsula.

The Trump administration has warned that all options, including a military strike, are “on the table” to halt North Korea’s ambitions of developing a nuclear-tipped missile that could reach the US mainland.

The phone call, which took place on Monday morning Beijing time, came amid speculation that North Korea could hold a sixth nuclear test this week.

North Korea often marks significant dates by displaying military capability, and South Korean officials say there is a chance the country will conduct a nuclear test or a major missile launch around the founding anniversary of its military on Tuesday.

On April 15, North Korea showed off its advancing nuclear weapons and missiles programme in an elaborate military parade in Pyongyang honouring Kim Il-sung, the late founder of the communist North Korean state and grandfather of the current ruler.

The displayed military hardware included prototype ICBMs and new mid-range solid-fuel missiles that can be fired from land mobile launchers and submarines, making them harder to detect before launch.

Trump has pressed Xi to exert greater pressure against North Korea given China’s status as the country’s sole economic lifeline and major ally. Monday’s call is the second time that the two leaders have spoken by telephone since meeting in Florida earlier this month.

Trump also spoke on Monday with Shinzo Abe, Japan’s prime minister, and they agreed to urge North Korea to refrain from what Abe termed provocative actions and called for China to play a larger role in helping to restrain North Korea.

Motosada Matano, spokesman for the Japanese prime minister, told Al Jazeera: “President Trump’s firm stance of having all options on the table has worked as a strong deterrent in this case and we highly value the policy.”

Speaking in Sydney on Saturday, Mike Pence, US vice president, said the aircraft carrier USS Carl Vinson would arrive in the Sea of Japan, bordering the Korean Peninsula, “in a matter of days”.

The ship joined other warships for joint exercises with Japan in the Philippine Sea on Sunday.

Confusion has clouded the naval strike group’s whereabouts in recent days after Trump suggested the “armada” was heading towards North Korea when in fact it was sent towards Australia.

In another related development, the US citizen detained by North Korea on Saturday has been named as Tony Kim, who also goes by his Korean name, Kim Sang-duk.

Kim, who is 58, taught accounting at the Pyongyang University of Science and Technology for about a month, according to the university’s chancellor Park Chan-mo.

The detention brings the number of Americans now being held in North Korea to three.

“It’s usually a tactic held by North Korea when they want to get the attention of high level US officials. South Korea says they are now looking into this detention,” said Al Jazeera’s Divya Gopala, reporting from Seoul.

Against this backdrop of geopolitical tensions, the issue of North Korean refugees in Chinese detention was raised on Monday by Human Rights Watch.

It said they risk severe torture if they were returned to North Korea.

Most North Korean refugees begin their escape by crossing into China and then try to make it to third countries – often in Southeast Asia – where they seek asylum in South Korea.

If caught and returned to North Korea they can face severe punishment.

China regularly labels North Koreans as illegal “economic migrants” and repatriates them based on a border protocol adopted in 1986.

“By now, there are plenty of survivor accounts that reveal Kim Jong-un’s administration is routinely persecuting those who are forced back to North Korea,” said Phil Robertson, deputy Asia director for Human Rights Watch.

“There is no way to sugarcoat this: if this group is forced back to North Korea, their lives and safety will be at risk,” Robertson said.

More than 40 North Koreans, including children and pregnant women, have been held by China over the past nine months, Human Rights Watch said, and at least nine forcibly returned to North Korea.

Since the end of the Korean War in 1953, more than 30,000 North Koreans have escaped – most after a deadly famine in the mid-90s – and settled in South Korea.

North Korean leader Kim Jong-un is believed to have tightened border controls since he came to power after the death of his father Kim Jong-il in December 2011. 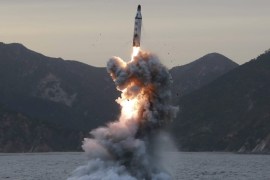