US Secretary of State Rex Tillerson has accused Iran of “alarming ongoing provocations” to destabilise countries in the Middle East as the Trump administration launches a review of its policy towards Tehran.

Tillerson told reporters that the review, which he announced on Tuesday, would not only look at Tehran’s compliance with a 2015 nuclear deal but also its behaviour in the region which, he said, undermined US interests in Syria, Iraq, Yemen and Lebanon.

His tough words matched those of US Defense Secretary Jim Mattis, who said in a visit to Saudi Arabia on Wednesday that Iran’s destabilising influence would have to be overcome to end the conflict in Yemen.

President Donald Trump ordered the review to evaluate whether suspension of sanctions related to the nuclear deal was “vital to the national security interests of the United States”, Tillerson said.

Though there was no sign that the Trump administration intended to walk away from the deal, Tillerson twice cautioned that if left unchecked, Tehran could become a threat like North Korea, which is also under pressure over its nuclear ambitions.

In a letter to US House of Representatives Speaker Paul Ryan released on Tuesday, Tillerson declared that Iran was meeting its commitments under the 2015 nuclear deal but there were concerns about Tehran’s role as a state sponsor of terrorism, Reuters news agency reported.

“A comprehensive Iran policy requires we address all of the threats posed by Iran and it is clear there are many,” Tillerson told reporters at the state department.

Tillerson said the 2015 nuclear deal between Iran and six world powers failed “to achieve the objective of a non-nuclear Iran and only delays their goal of becoming a nuclear state”.

Iran has yet to comment on the Trump administration’s review, but Iranian Supreme Leader Ayatollah Khamenei warned in November that Tehran would retaliate if the United States breached the nuclear agreement.

Tillerson said one of the mistakes in the way the agreement was put together was that it ignored all the other serious threats Iran posed outside of its nuclear programme.

“That is why we have to look at Iran in a very comprehensive way in terms of the threat it poses in all areas of the region and the world,” he added.

“This deal represents the same failed approach of the past that brought us to the current imminent threat we face from North Korea,” Tillerson said of the nuclear deal.

Tillerson’s notice to Congress was part of a 90-day process in which the president has to certify that Iran is complying with the nuclear accord. It is the first update under the Trump administration.

The next test of Trump’s attitude towards the nuclear deal will be in May when he must decide whether to extend sanctions waivers for Iran first signed by Obama.

During his presidential campaign, Trump called the agreement “the worst deal ever negotiated” and said he would review it once he reached office.

The European Union’s foreign policy chief, Federica Mogherini, said last month after meetings with senior Trump administration officials she was reassured in the talks that the US was committed to fully implementing the deal. 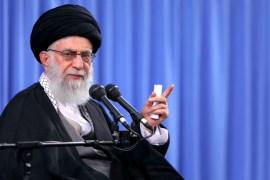 Supreme leader hits back at US president over his travel ban and threats towards Iran. 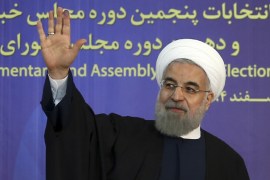