China has launched its first cargo spacecraft, making further progress in its goal of establishing a permanently manned space station by 2022.

The Tianzhou-1 cargo resupply spacecraft lifted off on Thursday evening on a Long March-7 Y2 rocket from the Wenchang Satellite Launch Centre in the southern island province of Hainan.

Minutes later, as the spacecraft cleared the atmosphere, the mission was declared a success by administrators at ground control on the outskirts of the capital, Beijing.

The spacecraft can carry six tonnes of goods, two tonnes of fuel and can fly unmanned for three months, according to state media.

It is expected to dock in two days with the Tiangong 2 space laboratory, or “Heavenly Palace 2”, where two astronauts spent a month last October in China’s longest-ever manned space mission.

The cargo spacecraft mission will provide an “important technological basis” for the construction of China’s space station, according to state media.

Despite the advances in its space programme for military, commercial and scientific purposes, China still lags behind the US and Russia.

In late 2013, China’s Jade Rabbit Rover landed on the Moon to great national fanfare, but ran into severe technical difficulties. 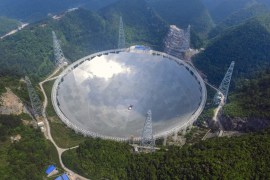 The size of about 30 football pitches, the $180m FAST telescope will explore farther and darker regions of space. 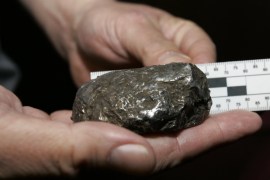 About 750,000 small discarded objects with explosive force believed to be flying in space in addition to large items.