A 17-year-old was reportedly shot dead by security forces on Saturday in Indian-administered Kashmir while at least 50 college students were wounded by police officers who fired pellets and tear gas.

Residents said security forces shot Sajad Hussain Sheikh, 17, in the head after their armoured vehicles were pelted with stones in the Batamaloo area of Srinagar, capital of the disputed Himalayan region.

“There were a couple of BSF [border security forces] vehicles passing through … when some youths threw stones at them. That is when there was a bullet shot and Sajad was hit straight in the head,” Tahir Ahmad, a local resident, told Anadolu news agency.

In a statement, Indian police said they were “collecting the details and are looking into the circumstances under which a person, identified as Sajad Hussain Sheikh, got killed”.

The statement added, however, there had been no police deployment in the area.

Earlier in the day, Indian security forces and students clashed at a college in southern Kashmir’s Pulwama town.

The Hindustan Times reported that students became angry after a security checkpoint was erected near the school and began hurling stones.

Security forces responded by firing pellets and tear gas. According the student union, at least 50 people were wounded.

“We have so far treated at least 54 persons who were hit by pellets and tear gas shells. Three critically injured persons have been referred to Srinagar. The injured are still coming,” the chief medical officer of Pulwama, Dr Talat Jabeen, was quoted as saying.

Kashmir, a Muslim-majority region, is controlled by nuclear-armed neighbours India and Pakistan. The two countries have fought three wars since independence from Britain in 1947, two over Kashmir.

Rebel groups have for decades battled Indian rule for Kashmir’s independence or its unification with Pakistan. India maintains more than half a million troops in the disputed territory.

More than 70,000 people have reportedly been killed in the conflict since 1989. 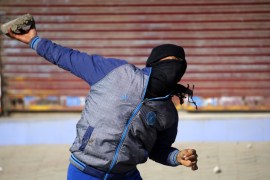 Soldiers accused of tying a man to the front of an army jeep as a human shield against stone throwers. 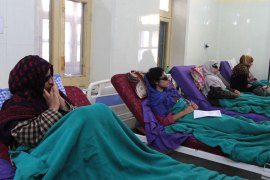