The transfer has begun in Syria of residents of two rebel-held towns in exchange for moving rebel fighters and civilians out of two other towns under an evacuation agreement.

Zabadani and Madaya, both located near the capital Damascus, are besieged by the army of Syrian President Bashar al-Assad and allied fighters from Hezbollah, the Lebanese Shia group.

Convoys of buses began transporting people from the two towns on Friday under a coordinated population swap that involves a total of four towns.

Fouaa and Kefraya, in northwestern Idlib province, are home to mostly Shia Muslims but have been encircled by Syrian rebels since March 2014.

Residents leaving them will be taken to government-held areas in adjoining Aleppo province.

‘Living in the unknown’

Houssam Mahmmoud, a Madaya resident, was in one of the 60 buses taking civilians to Idlib on Friday.

“I left my mother behind. She refused to leave her home and her land,” he told Al Jazeera by Skype from the bus.

“Two years under siege, hunger, air strikes, cold and rain [has] ended with displacement. We do not know where we are going to live.”

Other departures planned for Friday have been postponed till Sunday.

“We have been living in the unknown, only to be displaced to another unknown,” said Mahmmoud.

“[The coordinators] told us to pack one bag only. Each person was given one bag to pack his life and move away.

“They woke us up at around 3am and told us we have to hurry. We ran like crazy trying to find our buses.”

The transfer was scheduled to begin last week, but has been postponed at least four times.

In advance of the population transfer, at least 50 buses entered Zabadani and Madaya while 100 buses and 20 ambulances arrived in Fouaa and Kefraya on Thursday.

From Idlib to Aleppo

Al Jazeera’s Hoda Abdel-Hamid, reporting on Friday from Hatay in southern Turkey near the Syrian border, said the buses started to move early in the morning.

“The first buses that moved were the ones leaving Idlib. They have arrived in Aleppo province.

“They are still in rebel-controlled areas in western Aleppo and will stay there for a while.

“Those moving from Zabadani and Madaya have a much longer way to go through government-controlled areas because there is a lack of trust between the two sides.

“The ones who have reached Aleppo will stay where they are until the others moving from Zabadani and Madaya reach rebel-controlled areas. This is a staggered movement of population.”

An activist in Fouaa, who requested anonymity, told Al Jazeera that rockets targeted some of the buses on their way out, causing damage to one bus and injuring two people.

“There are at least 7,500 people expecting to be evacuated, among them are at least 1,500 rebel fighters,” he said.

The Syrian Observatory for Human Rights (SOHR), the UK-based monitoring group, said at least 2,100 residents, including rebel fighters, are due to be evacuated from Zabadani and Madaya and transported to Idlib.

INTERACTIVE: Idlib province – Who controls what

The transfer is part of a deal brokered by Iran and Qatar that will see more than 10,000 people evacuated and hundreds of prisoners exchanged.

According to the UN, at least 4.7 million people are living in hard-to-reach and besieged areas in Syria and are exposed to grave protection threats. 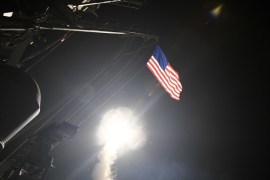 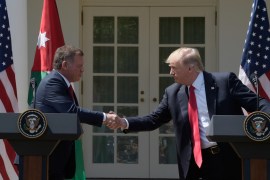 Is Donald Trump ready to make a deal on Syria?

The US president is fond of saying his favourite thing in life is deal making.