Brazil’s Supreme Court has announced corruption investigations into at least eight ministers and dozens more top politicians in a sweeping decision that affects almost one third of embattled President Michel Temer’s government and many of his top allies.

The list of names under investigation released by Justice Edson Fachin on Tuesday read like a Who’s Who of Brazilian politics, tarnishing past statesmen and potential presidential candidates alike.

The list, whose contents had been subject to furious speculation and a number of leaks, became public when Fachin lifted the seal on plea bargain testimony from 77 employees of construction company Odebrecht, which has admitted paying millions of dollars in bribes.

In Sao Paulo, residents banged pots and pans in protest against political corruption, while in the capital Brasilia deputies left a session in the lower house earlier in the day as news of the list began to break.

The investigation into eight ministers, or nearly a third of the president’s cabinet, poses a serious threat to Temer’s efforts to pass austerity reforms that he says are needed to regain investor confidence and lift the economy out of its worst recession on record.

“More than having eight ministers on the list, the biggest problem for the government is seeing its whole political nucleus there,” said Danilo Gennari, partner with Brasilia-based consultancy Distrito Relacoes Governamentais, referring to the implication of key government allies.

Among that core is Temer’s chief of staff Eliseu Padilha, an experienced politician considered key in negotiations with Congress to pass the administration’s crucial pension reform.

Padilha said he will defend himself in court.

Temer’s ministers of foreign affairs, trade and agriculture also are under investigation, as well as the heads of both houses of Brazil’s Congress and former presidents Fernando Henrique Cardoso, Luiz Inacio Lula da Silva and Dilma Rousseff.

“The political crisis will deepen and we risk an institutional paralysis because the entire Brazilian political system is under question,” opposition senator Jorge Viana, who is under investigation himself, said in a statement.

It also throws into doubt the credibility of a number of potential presidential candidates for elections in 2018, with some of the most commonly mentioned names under investigation.

Temer has vowed to suspend ministers who are charged and dismiss any if indicted.

Tuesday’s decision to make public the names targeted in the investigation goes back to March, when Brazil’s top public prosecutor asked the Supreme Court to open 83 investigations into senior politicians based on the Odebrecht employees’ testimony.

Local media have reported the testimony accuses dozens of politicians of taking bribes to help what was once Latin America’s biggest builder win lucrative contracts with state-run oil company Petrobras. 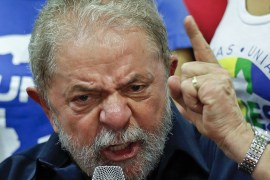 Rumoured Lula da Silva return to office slammed by critics as a desperate attempt to save beleaguered government.