In a surprise move, Mahmoud Ahmadinejad, Iran’s former president, has registered as a candidate for next month’s presidential election.

Ahmadinejad had previously said he would not stand after being advised not to by supreme leader Ayatollah Ali Khamenei, saying he would instead support his former deputy, Hamid Baghaei, who also registered on Wednesday.

He said he remained committed to his “moral promise” to Khamenei of not running for the May 19 election.

Khamenei’s “advice was not a ban”, he said at the interior ministry where registration was taking place.

“I repeat that I am committed to my moral promise [of not running] and my presence and registration is only to support Mr Baghaei.”

In 2009, Ahmadinejad’s re-election was followed by one the largest protests to hit the country since the Islamic Revolution three decades before.

Ahmadinejad’s populist approach and humble roots mean that he remains a popular figure among poorer sections of society. 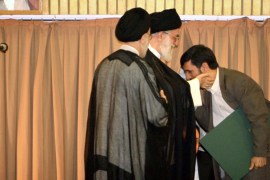 Two-term president and former Tehran mayor says he is bowing to the advice of Supreme Leader Ayatollah Ali Khamenei.