The state department has announced it is ending US funding for the United Nation Population Fund (UNFPA), the international body’s agency focused on family planning as well as maternal and child health in more than 150 countries.

The state department said it was withholding $32.5m in funding for the fiscal year of 2017 because the UNFPA “supports, or participates in the management of, a programme of coercive abortion or involuntary sterilisation”.

The cut marks US President Donald Trump’s first move to curtail funding for the United Nations and is likely to raise further questions about how deep those cuts will eventually go throughout the organisation, where the United States is the top donor.

It comes after Trump in January reinstated the so-called Mexico City Policy that withholds US funding for international organisations that perform abortions or provide information about abortion.

Known by critics as the “global gag” rule, it has been broadened in scope by Trump to include all global health assistance in his January 23 executive order that withholds at least half a billion dollars in US funds.

In a statement, UNFPA said it regrets the US decision to end funding, which it said is based on an “erroneous claim” that the agency supports coercive abortion or involuntary sterilisation in China.

UNFPA said its mission is “to ensure that every pregnancy is wanted, every childbirth is safe and every young person’s potential is fulfilled”.

“The support we received over the years from the government and people of the United States has saved tens of thousands of mothers from preventable deaths and disabilities, and especially now in the rapidly developing global humanitarian crises,” the statement said.

The cut follows Trump’s proposed 28 percent budget reduction for diplomacy and foreign aid, including an unspecified reduction in financial support for the United Nations and its agencies, announced last month.

The state department said the funds it was withholding would be transferred to the US Agency for International Development (USAID) to support family planning, maternal and reproductive health activities.

UN agencies such as the UNFPA are funded by governments voluntarily.

UN officials have warned that abrupt funding cuts could trigger more global instability and argued that dollars for diplomacy are more effective than military spending in combating terrorism.

President George W Bush defunded the UNFPA from 2002 to 2008, arguing that its presence in China constituted participation in the country’s “one child” family planning policy.

At the time, as the US government announced it had pulled $34m of funds, the UNFPA said the lost funding would have prevented two million unwanted pregnancies and the deaths of 77,000 children.

Bush pulled funding from the agency despite a report from a state department fact-finding team concluding after a trip to China that it found “no evidence that UNFPA has supported or participated in the management of a programme of coercive abortion or involuntary sterilisation in China”. 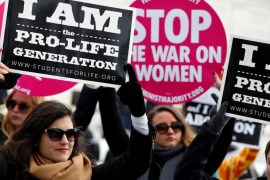 Tens of thousands convene in the US capital, spurred on by Donald Trump who has vowed to end taxpayer-funded abortion. 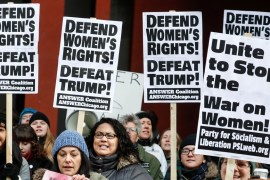