Three American troops have been wounded after an Afghan soldier opened fire on them at a base in the southern province of Helmand, the NATO-led Resolute Support mission said, as separate attacks and clashes across the country left dozens dead.

A spokesman for the Afghan military in the south of the country said the Afghan special forces soldier was shot dead after firing at the Americans at Camp Shorab airbase on Sunday.

The soldiers are receiving medical care, the NATO-led training and assistance mission said on Twitter.

So-called “green-on-blue” insider attacks by Afghan soldiers on international service members were a major problem several years ago, but now occur less frequently after security measures were improved and the number of foreign troops in the country fell sharply.

Most foreign combat troops withdrew from Afghanistan at the end of 2014, 13 years after they removed the Taliban from power, but around 13,000 NATO-led soldiers remain to help advise and train Afghan forces fighting a revived Taliban.

Last May, two Romanian soldiers were killed and a third wounded after two members of a local Afghan police unit they were training shot them.

Camp Shorab in Helmand, previously known as Camp Bastion, is a major former US and British base now run by the Afghan army.

Helmand has been one of the most fiercely contested regions of the country, with nearly 1,000 coalition troops killed there since the US-led military intervention in 2001.

‘Violence across the country’

The US said in January that about 300 Marines would be sent to Helmand to assist Afghan forces in intelligence and logistical matters in their battles against local armed groups.

Elsewhere in Afghanistan, Taliban fighters attacked a district headquarters in the Kandahar province using a suicide car bomb, said Samim Khpolwak, a spokesman for the governor.

A security official, who spoke on condition of anonymity because he was not authorised to release information, said six police were killed and five others were wounded in the assault.

He said two Afghan soldiers were killed and three others were wounded by a roadside bomb during the operation.

Two Taliban commanders were killed in an apparent US drone strike in the Barmal district of the eastern Paktika province, said Mohammad Rahman Ayaz, spokesman for the provincial governor.

Another 10 fighters were killed in a separate drone strike in the Dand-e Patan district of neighbouring Paktia province, said Governor Zelmai Wessa. 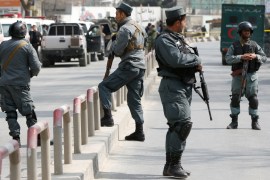 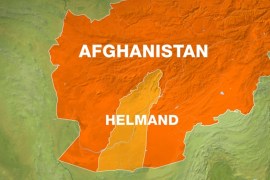 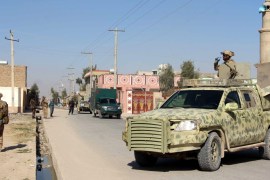