A double bomb attack in the Old City of Damascus on Saturday killed dozens of people – mostly Iraqi Shia pilgrims – and wounded more than 100, in one of the bloodiest bombings to hit the Syrian capital.

Syrian State TV aired footage from the scene showing blood-soaked streets and several damaged buses in a car park, apparently where the explosions went off near the Bab al-Saghir cemetery.

The cemetery is one of the capital’s oldest and is where several prominent religious figures are buried.

Following a visit to local hospitals, Interior Minister Mohammed al-Shaar put the death toll at 40 people. He also said a further 120 people were wounded in the attack, which targeted civilians, including Arab visitors, who were frequenting the area’s shrines.

Shaar did not elaborate, but Iraqi Shia often visit shrines in Syria. Iranians and other Shia from Asia are often also among the pilgrims to the area.

Iraqi state TV said at least 40 Iraqi citizens had been killed in the twin blasts.

There were conflicting reports on what had caused the explosions.

The Syrian Observatory for Human Rights, a UK-based monitor tracking developments in Syria’s war, said a roadside bomb detonated as a bus passed and a suicide bomber blew himself up in the Bab al-Saghir area.

Syria’s SANA state news agency reported that both blasts were caused by explosive devices near the Bab al-Saghir cemetery.

Al Jazeera’s Natasha Ghoneim, reporting from Gaziantep on the Turkey-Syria border, said the attack was one of the deadliest in recent memory in the Syrian capital. She noted, however, there had been an attack in January that targeted soldiers and killed 10 people.

“We are talking about a very significant death toll … What is unique is that Damascus – which is President Bashar al-Assad‘s stronghold, he has firm support there – has been relatively safe. Attacks like this are not common,” said Ghoneim.

A similar attack in Damascus last year, which was claimed by the Islamic State of Iraq and the Levant (ISIL) group, targeted one of the most revered Shia shrines and killed at least 12 people.

No claim of responsibility was immediately made for Saturday’s attack.

Assad has been supported in the country’s war by Shia militias from countries including Iraq, Afghanistan and Lebanon.

The Damascus attack could provide the impetus for increased Iraqi strikes against ISIL in Syria, which Baghdad has already carried out near the border.

Prime Minister Haider al-Abadi has vowed he would “not hesitate” to strike attackers in neighbouring countries if they posed a threat. 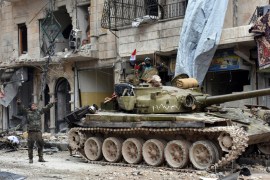 The advance of government forces comes a week after fruitless negotiations between Damascus and rebels in Astana. 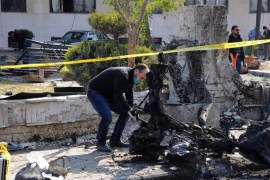 Reports of deaths and injuries after blast near a market and a police officers’ club in Masaken Barzeh district. 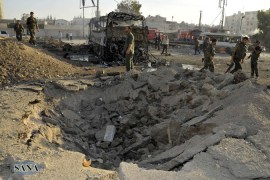 Dozens killed in violence across Syria, as car bombs explode in Damascus and Idlib, activists and state media report.