A diplomatic row between the Dutch and Turkish government shows no sign of ebbing, with the Netherlands barring Turkey’s foreign minister from entering the country and forcing the Turkish family affairs minister to leave the country.

Both Turkish officials wanted to hold rallies for Dutch Turks to gain support for a constitutional referendum to be be held in April.

In a written statement on Sunday, Binali Yildirim, Turkey’s prime minister, said Turkey would take “strong countermeasures” as a response to the Dutch actions.

“Our so-called European friends, who mention democracy, freedom of speech and human rights, have, in the face of this event, once again failed the class,” he said, adding that the recent events showed “who Turkey’s real friends are”.

The events he was referring to included Saturday’s occurrences in the city of Rotterdam, where Fatma Betul Sayan Kaya, Turkey’s family affairs minister, wanted to visit the Turkish consulate to speak to a pro-Turkish crowd.

However, Dutch authorities refused Kaya access to the building, resulting in a standoff between Dutch police and the Turkish minister and her security detail.

She was eventually declared an “unwanted alien” and deported to Germany, leading to skirmishes between Dutch Turks and riot police shortly after midnight in Rotterdam, which houses a large Dutch community of Turkish descent.

In a statement, the Dutch government said Kaya and the Turkish government were told she was not welcome in the Netherlands.

Despite these warnings, Kaya travelled to Rotterdam, where she was stopped by Dutch policemen before entering the consulate.

She then refused to leave her armoured car, leading to a stalemate that went on for about an hour.

In a statement, the Dutch government said: “Prime Minister [Mark] Rutte and Minister of Foreign Affairs [Bert] Koenders then called their Turkish counterparts to discuss the situation. These deliberations led to Kaya leaving the Netherlands via the German border.”

Rotterdam Mayor Ahmed Aboutaleb said in a statement the Turkish consul-general in Rotterdam had “scandalously misled” Dutch authorities about the night’s events and Kaya’s visit to the city.

He said the consul-general had called for people to come to the consulate despite an area ban being in place.

For her part, Kaya said on Twitter that democracy, fundamental rights and freedoms were forgotten in Rotterdam.

“As an elected minister, a Turkish citizen and a woman l will never give up against this unlawful treatment,” she said.

After Kaya was forced to leave, a crowd of about 1,000 protesters outside the Turkish consulate clashed with riot police, leading to several arrests and many people suffering injuries.

Around 2:30am local time, riot police were able to disperse the crowd, which had thrown stones and pots at them, and restore order to the city after using dogs and water cannons.

Tensions between the Netherlands and Turkey first rose on Saturday after the Dutch authorities barred Cavusoglu, the Turkish foreign minister, from landing in the country, citing “risks to public order and security”.

Dutch authorities have said they do not want Turkish ministers campaigning for the referendum.

After Cavusoglu’s aircraft was refused landing rights in the Netherlands, he flew to the French city of Metz.

In a response to the Dutch decision, Turkish President Recep Tayyip Erdogan called the Netherlands “fascists” and “remnants of Nazis”.

Aboutaleb took offence at this comparison.

“We have been compared to Nazis. I wonder if they know that I am mayor of a city that was bombed by the Nazis,” he said in a response to Erdogan’s claims.

“As you can imagine, today is not a good day for Dutch-Turkish relations, and we will see how it will develop further,” he said.

The row between the Netherlands and Turkey comes just days before the Dutch hold their parliamentary elections on March 15.

The tensions between the Netherlands and Turkey follow a row between Germany and Turkey.

Germany refused to approve similar Turkish rallies for the referendum, which led to a German authorities also being accused of “Nazi practices” by Erdogan. 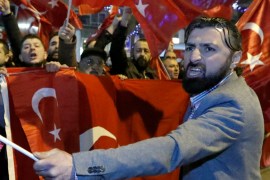