European Union leaders confirmed Donald Tusk for a second term as their president, angering his home country of Poland and opening up a new rift at a time when EU unity is essential.

The 27 other EU leaders overrode weeks of objections from the nationalist government in Warsaw, which has a long and bitter rivalry with former Prime Minister Tusk and opposed giving him another term at the EU.

Tusk’s supporters portrayed his re-election on Thursday as head of the EU Council, one of the bloc’s most prestigious jobs, as a sign of stability and continuity for the troubled bloc.

Tusk’s future was dealt with in less than an hour as fellow leaders rejected the argument of Poland, an increasingly awkward partner, that a decision should be delayed.

That spared the EU a long debate about its leadership at a time when it is dealing with Britain’s planned departure and a host of other challenges. Austrian Chancellor Christian Kern said such a dispute would “plunge Europe into a senseless crisis”.

There is a lot of bad blood between the current administration in Warsaw and the president of the European Council. Donald Tusk himself acknowledge what he called a paradox that his own country opposed him, but he is promising to make the European Union a better and stronger institution.”

Poland said it would refuse to approve some summit texts, and raised questions about how lasting a rift the move would create.

Polish Prime Minister Beata Szydlo said it was “very bad” that Tusk was pushed through over the objections of his home country, adding that “today it applies to Poland, but in the future this may apply to other nations”.

With a show of 27 hands that isolated Poland, Tusk still felt there was enough unity around him to go on for a second term of two and a half years.

The council president is responsible for chairing summits, coordinating the work of member countries and making sure the 28 nations speak as much as possible with one voice on the international stage.

“It may sound like a paradox because of the context, but anyway, your decision is an expression of our unity today,” Tusk told leaders after his re-election. “I will work with all of you without any exceptions because I am truly devoted to a united Europe.”

WATCH: Can the EU survive the populist wave?

Szydlo, however, said Tusk could not be impartial when it came to dealing with the government in Warsaw.

The leader of Poland’s governing Law and Justice party, Jaroslaw Kaczynski, accused Tusk of disloyalty to his homeland, saying he didn’t have the right to “function under (Poland’s) white and red flag”.

In an apparent reference to the Polish government, Tusk said: “Be careful of the bridges you burn because once they are gone you can never cross them again.”

He also vowed to keep his nation out of political isolation despite its obstructionist course.

She said it is important to seek consensus, but “the search for consensus must of course not be used for a blockade”.

Merkel stressed other EU countries’ interest in good relations with Poland. “We will see how things develop. I hope that we can return to sensible cooperation,” she said.

Poland’s government argues that Tusk supports the domestic opposition in Poland and has failed to protect the country’s interests in the EU.

There is also long-standing personal animosity between Tusk and Kaczynski, Poland’s most influential politician.

Kaczynski accuses Tusk of contributing, through lax security, to the death of his twin brother, President Lech Kaczynski, in a plane crash in 2010.

On Thursday, Warsaw failed to win support even from frequent ally Hungary, which has also clashed in recent years with Brussels over Hungary’s refusal to take in migrants and over concerns about the rule of law.

Other EU countries weren’t impressed with its proposal that Jacek Saryusz-Wolski, a little-known European Parliament lawmaker, replace Tusk in a job traditionally held by a former national leader.

“I don’t see how one country could oppose this solution when all the others are in favor,” French President Francois Hollande said. 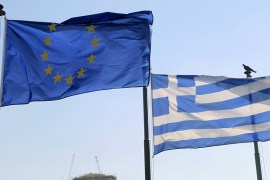 Brexit, Grexit and the future of the EU

Former Greek Finance Minister Yanis Varoufakis on the EU’s disintegration, and we discuss the future of cyberwarfare.