A former journalist fired for fabricating details in stories made at least eight of a recent slew of threats against Jewish institutions across the United States, as part of a campaign to harass and frame his ex-girlfriend, federal officials have said.

Juan Thompson was arrested in St Louis and appeared there in federal court on Friday on a cyberstalking charge.

But that left unsolved more than 100 other threats made since the beginning of the year, some of which forced the evacuation of Jewish community centres (JCC) and schools.

The Anti-Defamation League has tabulated a total of 121 threats reported since January 1, labelling them an “epidemic”.

“Just because there’s been an arrest today doesn’t mean that threats have disappeared or will stop,” Evan Bernstein, New York regional director for the Anti-Defamation League – also a target of the bomb threats – told a press conference on Friday.

“There are many more JCC bomb threats that have not been solved … and we hope all law enforcement will continue to be diligent.”

Thompson started making threats on January 28, a criminal complaint said. It is unclear why Jewish organisations were targeted.

The first threat was in an email to the Jewish History Museum in New York written from an account that made it appear as if it were being sent by an ex-girlfriend.

“Juan Thompson put 2 bombs in the History Museum set to go off Sunday,” it said.

He followed that up with similar messages to a Jewish school in Farmington Hills, Michigan, and to a school and community centre in Manhattan, authorities said.

In another round of emails and phone calls, he gave the woman’s name, rather than his own, the court complaint said.

The Council on American-Islamic Relations received an anonymous email saying the woman put a bomb in a Dallas Jewish centre.

Thompson, who is black, then took to Twitter: “Know any good lawyers?” he wrote. “Need to stop this nasty/racist #whitegirl I dated who sent a bomb threat in my name.”

He later tweeted to the secret service saying he had been “tormented by an anti-Semite. She sent an antijewish bomb threat in my name. Help.”

But police say it was a hoax created to make the woman look guilty.

Thompson also made threats in which he identified the woman as the culprit, authorities said.

Thompson was fired from the online publication The Intercept last year after being accused of fabricating several quotes and creating fake email accounts to impersonate people, including the Intercept’s editor-in-chief.

One of the stories involved Dylann Roof, the white shooter of black worshippers at a Charleston, South Carolina, church.

Thompson had written that a cousin named Scott Roof claimed the gunman was angry that a love interest chose a black man over him. A review showed there was no cousin by that name. The story was retracted.

The Intercept wrote Friday it was “horrified” to learn of Thompson’s arrest.

According to the criminal complaint, Thompson and the ex-girlfriend, a social worker, broke up last summer.

The following day, her boss received an email purporting to be from a national news organisation saying she had been pulled over for drunken driving. Her company, a nonprofit that works to end homelessness, also got faxes saying she was anti-Semitic.

The Federal Communications Commission said on Friday it will grant an emergency waiver allowing Jewish community centres and their phone carriers to track the numbers of callers who make threats, even if the callers try to block the numbers.

Unlike Thompson’s emailed threats, the majority were made by a person or people by telephone using voice-masking, automated calling and spoofing technologies to hide their identity and location.

All proved to be hoaxes and no one has been injured.

On February 16, police in South Carolina arrested a man with suspected ties to white supremacist groups for allegedly planning to attack a synagogue. 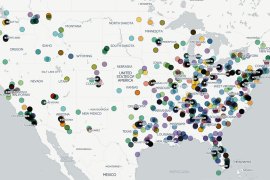 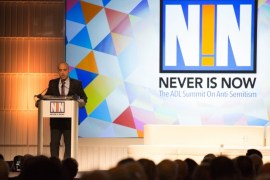 Jewish activist vows solidarity with Muslims in the US

Head of Anti-Defamation League pledges to register as Muslim, if Donald Trump creates a database of Muslim Americans.