Carey Island, Malaysia – In a wooden hut, elevated above the swampy ground, a shaman from Malaysia’s Indigenous Mah Meri people sits cross-legged in front of an altar laden with offerings of food and drink and decorated with palm fronds folded and twisted into birds and flowers.

As each visitor climbs the steps into the chamber and falls to their knees, the shaman dabs first their forehead and then their hands with white chalk. It is a blessing; a cleansing for the year ahead.

Every Ancestors’ Day, or Hari Moyang, the Mah Meri who have lived on Carey Island on Malaysia’s west coast for generations honour the spirits of their ancestors and the island they call home in a series of ceremonies that last for a month.

But this year’s celebration took place amid rising concern about government plans to build a 10,000-hectare port and industrial zone on the island to expand Port Klang, which lies just north of Carey Island and is the world’s 12th busiest cargo hub.

If the plans proceed, the Indigenous people will be squeezed into an ever smaller area of the low-lying island, which is just an hour’s drive from Kuala Lumpur.

“This is the land of the Mah Meri,” says Kemi bin Khamis, 42, who carves the spirit statues from local hardwood. “This is our island. I don’t want to to move.”

The Mah Meri are one of 18 ethnic groups which make up the Orang Asli; descendants of the original inhabitants of the Malay peninsular who are now thought to number about 179,000.

Ancestral land is crucial to the Orang Asli’s way of life and the landscape central to their largely animist beliefs, but as Malaysia’s economy has expanded, and demand for land has grown, the Indigenous people have lost vast swaths of their territory to plantations, logging and industrial projects.

The government has yet to implement Suhakam’s recommendations, but the pressure on Orang Asli continues to grow. According to Minority Rights Group International, less than a fifth of the Indigenous tribes’ native land has been set aside as Orang Asli areas or reserves. On Carey Island, only two of the five villages have been recognised, and they are now thought to be the ones most at risk from the port development.

“It’s not that fair,” Kemi says softly of the official approach to Orang Asli land. “If they want to take, they will take. There’s no land title or grant.”

The federal government agency overseeing Orang Asli affairs told Al Jazeera on Friday that it was unaware of any plans to move the Mah Meri community. It added that because land issues fall under state government jurisdiction, authorities there would have to pay compensation and provide a suitable area for relocation.

The Mah Meri aren’t the only Orang Asli struggling to hold on to what is theirs. In the northeastern state of Kelantan, the forest-dwelling Temiar are fighting loggers , backed by the state government, in a reserve that is part of their ancestral land, setting up blockades and risking arrest to defend their territory.

“The view is why should we give the land to the Orang Asli when it’s valuable land,” says Colin Nicholas, coordinator of the Centre for Orang Asli Concerns, an NGO that works on behalf of the Indigenous people. “If you have the chance, why not grab it?”

The Orang Asli have responded with legal action, increasingly determined to assert their rights and defend their way of life. This week, a group of 188 Indigenous people in Malaysia’s south won a five-year court battle over customary land taken for the Iskandar development, a project three times the size of Singapore.

“There have been some very strong judgments saying Orang Asli do have native rights to the land, even if you’ve gazetted it as a forest reserve, a Malay reserve or even given it away to someone else,” Nicholas explained. “But it’s not being recognised by those who make the decisions.”

It was in the early 20th century, when Malaysia was ruled by the British, that rubber was first planted on Carey Island, but the country’s rapid post-independence development has greatly increased the pressure on the Mah Meri.

Kemi, who has five children, remembers the time when the sea and the rivers were clearer, the fish easier to catch and the crab plentiful, but agriculture and industrialisation have brought pollution, and rubbish dots the island’s beaches. Communities have to travel ever further for a decent catch, he says.

The plantations are now owned by Sime Darby, one of the world’s largest producers of palm oil – the Mah Meri grow some oil palm plants to supplement their income – and a golf resort opened a few years ago close to Kampung Sungai Bumbun. The 810-hectare site, part of which was once Indigenous community land, is now being developed into a housing estate for stressed-out city dwellers.

The affected families agreed to only 2,000 ringgit ($450) each in compensation. The developer, meanwhile, is looking forward to a “higher than typical” profit margin for the luxury villas it aims to build.

Plans for the port remain sketchy and the Indigenous villages may yet be able to work with the state government. The port itself is a project of the federal government led by a rival political coalition, and elections are due by the middle of next year. The project’s proponents will also need to convince Sime Darby to give up its plantations.

‘Not from our time’

In front of the shaman’s hut, the dances are coming to an end. The men and women stand patiently in their costumes – made from the bark of native trees – as the scores of foreign tourists who’ve come to watch the celebrations take photos.

“Their environment, their surroundings, this is their life,” says Rashid Esa, who manages the Mah Meri Cultural Village on the island, which is supported by the Tourism Ministry.

“[Mah Meri] are a unique people. They are not from our time, really.”

Next to a bamboo table laden with chocolate drinks, fruit juices, and food for the spirits, 15-year-old Sazrin anak Gali removes his mask, which has been smudged white by the shaman, and runs his hand through his hair.

The schoolboy comes from a family steeped in Mah Meri culture and has been learning traditional dance since he was seven. Sazrin has no doubts about what will happen if the port project goes ahead.

“I will resist,” he says, cradling the mask, with its riot of woven hair in the crook of his arm. “This is the land where I was born. Everyone will protest.” 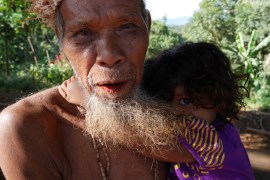 Out of Sight: Malaysia’s Orang Asli

101 East investigates what led to the deaths of five indigenous children who went missing in the jungles of Malaysia. 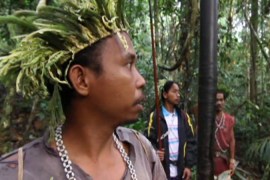 Protests in Malaysia over indigenous lands