Northern Ireland is holding its second assembly election in a year, a vote seen as vital to ending a major political crisis that if left unresolved could lead to the end of the UK region’s semi-autonomy.

The snap poll on Thursday, which comes just as Britain begins to negotiate its exit from the European Union, follows the collapse of a power-sharing agreement in January after Irish nationalists Sinn Fein withdrew support for the pro-British Democratic Unionist Party (DUP).

Polls close at 22:00GMT but results are not expected until Saturday. In total, 228 candidates are competing for 90 seats across Northern Ireland’s 18 constituencies.

Long-simmering tensions between the two parties boiled over after Martin McGuinness, Sinn Fein’s deputy first minister, quit his post in protest over a botched green energy subsidy scheme instigated by Arlene Foster, DUP’s first minister when she was economy minister.

There are reports that about $600m was misspent in the scheme and Foster is accused of mishandling the project.

McGuinness’ resignation triggered fresh elections to the Northern Ireland Assembly, a semi-autonomous legislature in Belfast in which representatives of once warring communities have shared power on and off since a 1998 peace deal.

If Sinn Fein and the DUP cannot resolve their differences after the vote, the assembly’s executive could be suspended and the province fully governed by London, the UK capital.

“If they can’t get through this election with a result that restarts the power-sharing agreement, they face the prospect of being run from London directly – which nobody wants,” Al Jazeera’s Laurence Lee, reporting from the capital, Belfast, said.

“But there are very good indications that the peace process is sufficiently robust now that they will probably be able to find a way through.”

Observers predict a similar outcome to the May 2016 assembly elections, in which the Protestant and conservative DUP won slightly more seats than the Catholic and socialist Sinn Fein.

“I’d be more pessimistic than optimistic that the DUP and Sinn Fein can get back in a government together quickly,” Jonathan Tonge, a Northern Ireland politics expert at Liverpool University, told the AFP news agency.

WATCH: Northern Ireland on the cusp of change

Tensions were also exacerbated by the British vote to leave the EU, known as Brexit, which the DUP supported but Sinn Fein opposed.

Northern Ireland voted to Remain in the June 23 EU referendum by a majority of 56 percent  to 44 percent.

McGuinness is not running in the election due to ill health. His successor as Sinn Fein’s leader in Northern Ireland, Michelle O’Neill, has signalled a possible way out.

“We’re up for going back into government but only on the basis of equality, respect and integrity,” she told AFP in an interview on the last day of campaigning on Wednesday.

“We cannot go into government with Arlene Foster as first or deputy first minister while there is a shadow hanging over her, but that doesn’t mean we can’t find a way forward.”

In the streets of Belfast, there was disillusionment over the latest scandal to hit its political system.

“I’m just fed up with all the corruption and all the scandals to do with the heating and all the rest of it,” civil servant Catherine Aouad told AFP.

Throughout the election campaign, Foster has appealed for Unionists to resist Sinn Fein’s demands for her to stand aside pending an investigation into the energy scheme.

“If you feed a crocodile it will keep coming back for more,” she told a party rally.

If DUP and Sinn Fein cannot agree to form a new power-sharing executive within three weeks, London will take over issues such as health, education and the local economy which are currently devolved.

UK Prime Minister Theresa May has said that she intends to pull Britain out of the EU’s single market and probably the customs union, which would make the border between Northern Ireland and Ireland the UK’s only land border with the EU.

The possibility of a return to checkpoints has revived memories of “The Troubles”, three decades of strife in Northern Ireland over British control of the province, in which more than 3,500 people were killed.

“The most disastrous thing would be the return of a border … which will greatly offend nationalists,” said Tonge. 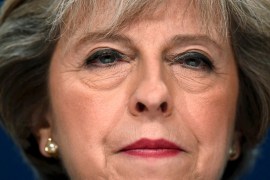 UK prime minister says Northern Irish leaders have a week to resolve their differences or there will be an election. 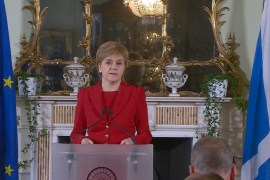 The prospect of a second Scottish independence referendum looms, as Sinn Fein also calls for a vote on a united Ireland. 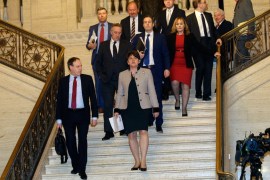 Early election to be be held on March 2 following the collapse of the region’s power-sharing government.