Thousands of Russians have marched in the capital, Moscow, in memory of Boris Nemtsov, an opposition leader murdered two years ago, calling for further investigations into his killing.

Nemtsov, a former deputy prime minister who became an outspoken critic of longtime President Vladimir Putin, was shot in February 2015 while walking across a bridge a short distance from the Kremlin with his Ukrainian girlfriend.

At the time, Nemtsov, 55, was working on a report that he said proved Russia’s direct involvement in a separatist rebellion that has raged in eastern Ukraine since April 2014. Russia has denied the accusations.

Some marchers on Sunday in Moscow carried Nemtsov’s portraits, Russian flags and placards with slogans such as “Russia without Putin”.

“We gathered here to demand bringing of Boris Nemtsov’s killers to justice, not only its performers but also its organisers and those who ordered it,” Ilya Yashin, a Russian opposition activist and an organiser of the march, told Reuters news agency.

When Boris Nemtsov was killed two years ago, the Russian opposition lost one of its most appealing and charismatic figures.

It’s a mark of the affection that many people had for him that still thousands of people can come out and mourn him.

But it also speaks to the problem that the opposition movement has here because you have to go back to this time last year to see an opposition rally of any comparable size to this one.

That is a deep and lasting problem for the opposition.

“We gathered here to demand political reforms and release of political prisoners.”

Police put the number of marchers at 5,000, but a group of voluntary observers said there were more than 15,000 demonstrators.

The authorities blocked off several streets in central Moscow for Sunday’s event, sealing in the marchers with metal fencing guarded by police.

The event largely occurred without incident, but police made several arrests and opposition leader Mikhail Kasyanov was attacked during in the march by an unknown assailant who threw green dye in his face.

“This is the hysteria of the government. They do not know what to do. The government is afraid,” Gennady Gudkov, a former deputy of Russia’s lower house of parliament and an opposition activist, said of the attack on Kasyanov.

After the march, thousands of people went to lay flowers on the site on the central Moscow bridge where Nemtsov was killed.

“It’s at times like this, particularly on the anniversary of Boris Nemtsov’s death, where you can kind of check in with the opposition and take the pulse of how [strong] the movement is,” Al Jazeera’s Rory Challands, reporting from the march, said.

“What we are finding at the moment is that there is still obviously a good number of people devoted to the cause to keeping the idea of a more democratic, a more liberal Russia alive, but it’s an uphill struggle for these people. They are not the majority in the country.

“Certainly when you get out of Moscow and St Petersburg, and into more rural parts of Russia, you find a population that’s much more conservative and satisfied with the current status quo.”

Rallies in other cities

Similar rallies to honour Nemtsov took place in cities across Russia, including St Petersburg and his hometown of Nizhny Novgorod.

A Moscow march to remember Nemtsov last year drew thousands of people, with officials saying about 7,500 protesters had taken part in the rally, while others put the figure closer to 20,000.

Separately, prominent opposition activist Ildar Dadin was released on Sunday from a Siberian prison, after a court quashed a sentence that made him the only person convicted under a tough law against public protests.

The 34-year-old emerged from a Siberian penal colony after 15 months behind bars for repeatedly holding unsanctioned rallies against Putin’s rule.

Dadin, who was declared a prisoner of conscience by Amnesty International, has complained of torture and abuse behind bars.

“I will continue to fight against Putin’s fascist regime,” Dadin said in footage broadcast online by the independent Dozhd channel.

“I will fight so that human rights are respected in Russia.” 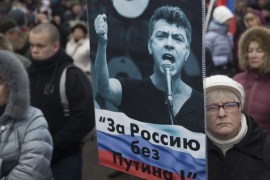 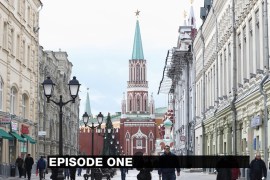 We travel the country to find out how Russians feel about their president and the way the Kremlin runs the country.