Iraqi forces advanced into the southern outskirts of Mosul on the second day of a push to drive ISIL from the city’s western half, as the visiting US defence secretary met officials to discuss the fight against the armed group.

With aerial support from the US-led coalition, Iraqi police and army troops launched the offensive on Sunday, part of a 100-day-old campaign that has already driven the fighters from the eastern half of the city.

Iraqi helicopters fired rockets at the village of Abu Sayyaf early on Monday, targeting a hill that overlooks the city’s airport.

By noon, the forces entered the village and gained control over much of the strategic hill as fighting was still raging.

Separately, militarised police in armoured vehicles were moving towards the sprawling Ghazlani military base on the southwestern outskirts of the city.

A US-led coalition has been providing close air support throughout the campaign to retake Iraq’s second-largest city. US special operations forces are embedded with some Iraqi units and thousands of US troops are in Iraq providing logistical and other support.

Meanwhile, US Secretary of Defense Jim Mattis was holding discussions with US and Iraqi officials, a week before he is expected to present a new strategy to President Donald Trump for defeating the Islamic State of Iraq and the Levant group.

“We’re going to make certain that we’ve got good situational awareness of what we face as we work together and fight alongside each other,” Mattis told reporters travelling with him.

Trump has repeatedly vowed to eliminate the group but has provided few details about how his approach might differ from that of the Obama administration, which had partnered with Syrian and Iraqi forces to drive ISIL, also known as ISIS, out of several towns and cities.

The battle for western Mosul, the group’s last major urban bastion in Iraq, is expected to be the most daunting yet.

The presence of up to 750,000 civilians also poses a challenge. 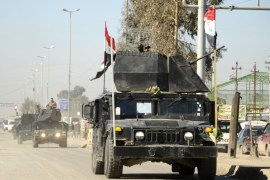 Troops backed by jets battle their way to Mosul airport, as US defence chief arrives in Baghdad on unannounced visit.