Torrential downpours have caused widespread flooding across parts of Indonesia, including in the capital, Jakarta, where the floodwaters are chest-deep in places.

The worst of the rains have fallen within the last two days.

The Jakarta Observatory reported 144mm of rain in the 24 hours up to 06:00GMT on Tuesday. The average for the entire month of February is 124mm.

This has resulted in thousands of homes being flooded and murky brown waters up to 1.5 metres deep in East Jakarta. Schools have been closed and many workers have been forced to stay at home.

Authorities say they have received more than 400 reports of flooding across Jakarta.

There has been the inevitable travel chaos with many cars abandoned as the waters continue to rise, but so far there have been no reports of any injuries.

Sutopo Purwo Nugroho, spokesman for Indonesia’s disaster management agency, said Jakarta’s rivers and storm drains were not able to cope with the monumental amount of rain that was unleashed by the thunderstorms.

Jakarta is a coastal city with as many as 13 rivers, which often burst their banks during the rainy season causing massive flooding in the densely populated communities.

The capital is hit by flooding to some degree every year during tropical Indonesia’s months-long rainy season, with the city’s numerous riverside communities worst affected.

The city suffered one of its worst seasonal inundations in recent history in January 2013. The flooding submerged a major downtown roundabout, forcing 30,000 people from their homes and leaving 20 dead.

The city has fared better this time round. This may be thanks to work carried out by the municipal government which dredged a number of rivers and relocated illegal squatters into subsidised apartments. 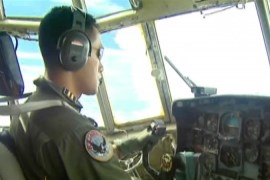 Army releases tonnes of salt into the atmosphere in preventive measure to avoid further flooding in the capital.