At least 39 people were killed after a car bomb exploded near a busy market in the Somali capital Mogadishu. More than 50 others were wounded.

In the deadliest attack since the election of President Mohamed Abdullahi Mohamed – nicknamed Farmajo – the vehicle exploded on Sunday at an intersection packed with civilians, traders, and security forces.

“We carried 39 dead bodies and there were many others injured,” Dr Abdikadir Abdirahman, director of the Aamin Ambulance Service, told Reuters news agency.

Mohamed Deg witnessed the attack. “I was very shocked. I saw people crying in pain and others lying on the ground wounded.”

Al-Shabab, the armed anti-government group, did not claim responsibility for the attack, but it came on the same day as it threatened to wage “vicious war” against Farmajo and his new government, according to the SITE intelligence group that monitors its accounts.

Farmajo described the attack as “horrific” on Twitter and shared pictures of himself visiting victims in hospital.

Local media reported the president had offered a $100,000 reward for information on who carried out the deadly bombing.

The latest attack underlines the challenge facing the new president, who has inherited an administration with limited control over Somali territory because of the presence of al-Shabab, and is heavily propped up by the international community.

African Union troops drove al-Shabab out of Mogadishu in August 2011 but the fighters continue to control rural areas and launch repeated attacks in the capital.

Jon Temin is an Africa specialist and former US State Department official. He told Al Jazeera the attack shows even though Al-Shabab doesn’t hold as much territory as it used to, the group still poses a serious threat.

“They are even more dangerous because of these types of hit-and-run attacks, which unfortunately, they’ve proven to be very adept at over the past few years,” said Temin.

“For the new president of Somalia, I think it has to be among the very top of his priorities. Shabab, particularly in the capital city of Mogadishu, is a daily threat, a daily concern, a real impediment to economic growth – and just a threat to individual security.”

Sheikh Hassan Yaqub Ali, a senior al-Shabab official, said in a speech broadcast on a radio station linked to the group that Farmajo was considered more dangerous than past presidents as he held joint American citizenship.

The blast brought international condemnation with the European Union describing it as “yet another act of terror targeting the Somali people by those wanting to undermine progress towards a stable and secure Somalia”.

The EU said it stood behind Farmajo’s efforts to bring security to his nation and build strong institutions.

In the week before the election on February 8, at least 28 people were killed when al-Shabab struck a popular hotel in Mogadishu.

Farmajo’s inauguration takes place on Wednesday, although he officially took office this week at a ceremony marred by a series of al-Shabab mortar strikes near the presidential palace that left two children dead.

Farmajo, whose brief stint as prime minister in 2010-11 showed him to be a no-nonsense leader set on improving governance and cracking down on corruption, is hugely popular in Somalia.

But he faces enormous difficulty in turning around one of the world’s most troubled nations.

Somalia has not had an effective central government since the collapse of Siad Barre’s government in 1991, which led to civil war and decades of anarchy. 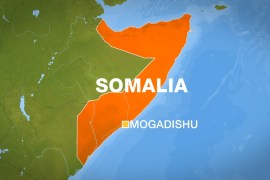