The ambassador of the United Arab Emirates to Afghanistan died on Wednesday of wounds sustained in a bomb attack in Kandahar last month that also killed five Emirati aid workers, the UAE’s foreign ministry announced.

“With great sadness and sorrow, we mourn the martyr of the nation and his duty, the righteous son Juma Mohammed Abdullah al-Kaabi, who gave his pure soul for the sake of humanity,” the ministry said in a statement quoted by official news agency WAM.

The diplomats were expected to open a number of UAE-backed projects as part of an aid programme in Afghanistan. 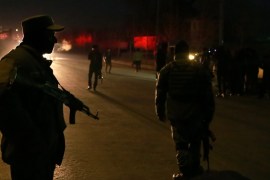