Turkish troops and Syrian rebels have entered ISIL-held Al Bab, the group’s last stronghold in northern Syria, at the same time as Syrian government forces are also approaching it, according to a monitor and Turkish-backed fighters.

Heavy clashes were under way with the Islamic State of Iraq and the Levant (ISIL) group on Saturday in Al Bab, 40km south of the Turkish border, which has been besieged since Monday, when government forces advancing from the south cut off a road leading into the town, the Britain-based Syrian Observatory for Human Rights (SOHR) said.

“Turkish forces and allied rebels in the Euphrates Shield campaign entered the western edge of the town and took control of a number of areas,” said the SOHR.

The Turkish-backed Ahrar al-Sham group announced on Saturday, on Twitter, that the rebel forces had taken Al Bab’s silos and sports complex in its southwestern districts.

The coalition’s operations room released a video on social media showing its fighters at the gates of the Hikma hospital.

The Turkish military said in a statement on Saturday that at least 43 ISIL fighters were “neutralised” [meaning either killed or captured] in the last 24 hours as part of the operation.

Turkey began a campaign inside Syria on August 24, attacking both ISIL (also known as ISIS) and Kurdish fighters.

After initial rapid progress, the campaign became mired in the deadly fight for Al Bab since December.

At least 66 Turkish soldiers have been killed in the campaign since it started, mostly in ISIL attacks, according to Turkey’s Dogan news agency. Turkey claims to have killed at least 2,705 ISIL members and 344 Kurdish fighters.

Al Bab has been under ISIL control since 2014, when the group seized large expanses of territory in Syria and neighbouring Iraq, proclaiming a caliphate.

On the diplomatic front, President Bashar al-Assad’s government and rebel delegations have been invited along with Staffan de Mistura, the UN special envoy for Syria, to meetings in Astana on February 15-16, according to Kazakhstan’s foreign ministry.

The talks in the Kazakh capital will discuss the implementation and consolidation of the ceasefire in Syria, the ministry said.

Representatives of Jordan and the US are also invited to the meeting.

The negotiations – brokered by Russia, Iran and Turkey – began last month with the aim of solidifying a broad ceasefire, in effect since late December.

The three countries have mapped out the areas they believe are controlled by the moderate opposition forces included in the truce and the armed groups that are not. 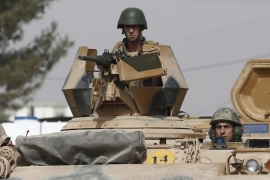 Ankara should focus on both its diplomatic capabilities and its firm control over the local friendly groups in Syria.