The International Committee of the Red Cross temporarily suspended some of its efforts in Afghanistan on Thursday, a day after gunmen killed six employees delivering aid to a remote northern region hit by heavy snowstorms.

A search operation was under way to find two charity workers still missing.

The head of the ICRC called the incident the “worst attack against us” in 20 years, but the group said it did not know who was responsible.

“We will put our operations on hold for at least a week after our colleagues were killed in the attack last night,” Thomas Glass, an aid worker and public relations officer with the ICRC, told Al Jazeera.

“We’ve been in Afghanistan for the past 30 years assisting people in need. We want to provide aid and help but not at the cost of our colleagues. So we need to know what happened before we restart our humanitarian efforts.”

Taliban spokesman Zabiullah Mujahid told Al Jazeera his group was not involved in the attack.

The governor of Jowzjan province, Lotfullah Azizi, said the aid convoy was attacked by suspected Islamic State of Iraq and the Levant (ISIL) gunmen.

A massive snowstorm dumped as much as two metres of snow on areas of Afghanistan over the weekend, causing an avalanche that killed more than 100 people.

Afghanistan is the Red Cross’ fourth-largest humanitarian programme in the world, and the attack follows a warning by the charity last month that mounting security issues made it difficult to deliver aid across the country.

That staff member had been travelling with three Afghan colleagues between Mazar-i-Sharif and Kunduz when assailants stopped their vehicles. The local staff were immediately released. 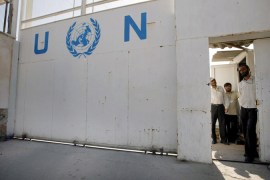 At least 36 have been killed in the country so far this year, the UN says, calling the attacks a worrying trend.