Residents of Yakla, an impoverished Yemeni town that was targeted last month in the first US military raid in the country authorised by President Donald Trump, have said more than a dozen civilians were killed in the botched operation.

Locals told Al Jazeera that at least 16 civilians, including women and children, were killed in the raid in Bayda province that also resulted in the death of one US commando and injured three others.

But local journalist Mujahid al-Selalee said Abdulraouf al-Dhahab, a tribal leader whose house was attacked in the raid, had repeatedly denied being a member of the armed group.

“He [Dhahab] made clear on numerous occasions that he has no ties with al-Qaeda. He denied that over and over and we know that based on those living with him,” Selalee told Al Jazeera.

“One of his brothers was associated with al-Qaeda, but he was killed by a drone a while back.”

Al-Qaeda mourned Dhahab’s death, calling him a “holy warrior”, and vowed to avenge him and other slain fighters.

In an initial statement, the Pentagon said it killed 14 members of al-Qaeda, but soon released a second statement admitting that the raid “likely” killed civilians as well.

Nora, the eight-year-old daughter of Anwar al-Awlaki, a US-born Yemeni preacher who was killed in a 2011 drone attack, was among the victims, family members said.

Her grandfather, Nasser al-Awlaki, a former minister of agriculture, said: “She was hit with a bullet in her neck and suffered for two hours”.

He told reporters that she was visiting her mother when the raid took place.

READ MORE: Yemen – Who controls what

Residents of the town said that several children were orphaned as a result of the attack.

“These kids, they lost their parents for no reason,” a resident who requested not to be named told Al Jazeera.

“Their mother was killed and now I am taking care of these boys and girls.”

Another resident said “whole families were wiped out” by the raid.

Al-Qaeda has exploited Yemen’s two-year civil war that pits Shia Houthi fighters against the Saudi-backed government of President Abd-Rabbu Mansour Hadi and has carried out assassinations and bombings, mostly in areas across the south.

The US has stepped up its use of drone strikes in recent years and, while it acknowledges some of them, it generally declines to comment on specific attacks. 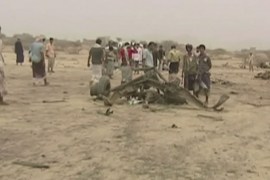 US military says civilians likely ‘caught up’ in gunfire in Bayda province, but stays mum on death of American girl.