Major renovations are under way in the Bangladeshi capital Dhaka after a fire razed 500 homes last month, with home builders trying to ensure that a similar disaster does not strike again.

The central committee of the shanty town is trying to overhaul the entire Korail slum, overseeing the construction of new homes with improved electrical wiring and ventilation.

The fire, which claimed one life, spread quickly because homes are crammed close to each other. An estimated 500,000 people live on less than a quarter of a square kilometre of land.

Work is now being done to widen the alleyways to give better access to firefighters. But residents are hesitant to give up space.

WATCH: Made in Bangladesh – Behind the Factory Fire

“Even if I am willing to give up some space, others won’t be,” Yasmin Akter told Al Jazeera.

“I told my neighbour, let’s both give up some space, so we can have a wider road between our homes. He refused.”

Dhaka is no stranger to deadly slum fires. More than 120 people were killed in June 2010 when a fire at a wedding party destroyed six buildings in the densely populated old part of the capital. 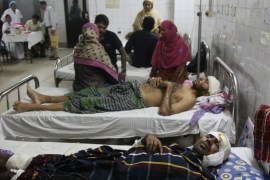 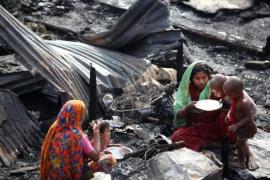 Hundreds left homeless as fire destroys a shanty town outside the capital Dhaka.