The Philippines’ Catholic Church has blasted President Rodrigo Duterte’s “war on drugs” for creating a “reign of terror”.

In its most strongly worded attack yet on the crackdown on drug pushers and users, the powerful Catholic Bishops’ Conference of the Philippines said killing people was not the answer to trafficking of illegal drugs.

The Church said, in a pastoral letter that will be read out in sermons on Sunday, it was disturbing that many did not care about the bloodshed, or even approved of it.

“An even greater cause of concern is the indifference of many to this kind of wrong. It is considered as normal, and, even worse, something that [according to them] needs to be done,” the bishops said in the letter, a copy of which was obtained by the Reuters news agency.

“An additional cause of concern is the reign of terror in many places of the poor. Many are killed not because of drugs. Those who kill them are not brought to account,” they said.

The presidential palace on Sunday lashed back at the Church for the letter, blaming it for being “apparently out of touch” with the wishes of those who back the changes introduced by Duterte.

“The efforts of these church leaders might be put to better use in practical catechetics that build strong moral character among the faithful, and so contribute more to the reign of peace felt by ordinary citizens everywhere, especially those who are innocent of illegal activities,” Ernesto Abella, presidential spokesman, was quoted as saying by Philippine media.

The Catholic Church, to which more than 80 percent of Filipinos belong, has earned the ire of Duterte after bishops criticised the spate of killings linked to the president’s narcotics crackdown.

More than 7,600 people have been killed since Duterte launched his anti-drugs campaign seven months ago, more than 2,500 in what police say were armed clashes during raids and sting operations.

Both the government and police have strenuously denied that extrajudicial killings have taken place. 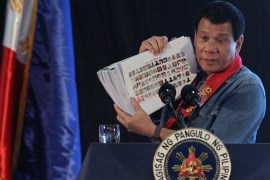 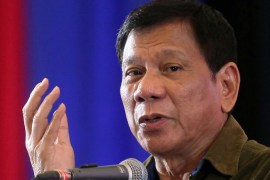 Philippine president seeks restoration of capital punishment in his fight against drug traffickers and users.