At least 40 fighters from Jabhat Fateh al-Sham – one of the largest rebel groups fighting against Syrian President Bashar al-Assad – have been killed in air strikes in Aleppo province.

The Syrian Observatory for Human Rights said it was unclear who carried out Thursday’s raids in western Aleppo province since a US-led coalition, the Syrian regime, and Russia have all carried out strikes against Fateh al-Sham positions in recent weeks.

“Warplanes, which may have been Russian or coalition aircraft, struck a Fateh al-Sham camp in Sheikh Suleiman,” the Britain-based Observatory said.

A source in Fateh al-Sham confirmed to Al Jazeera that dozens had died in air strikes on a training camp in western Aleppo’s countryside.

Jabhat Fateh al-Sham split from al-Qaeda in July, a move analysts said was aimed at easing pressure from both Russia and the United States.

However the group is not party to a Russian and Turkish-brokered ceasefire that went into effect on December 30.

According to the monitor, the group has sustained major losses in recent weeks with about 100 of its fighters killed since the start of 2017.

Al Jazeera’s Stefanie Dekker, reporting from Gaziantep near the Turkey-Syria border, said the latest air strikes signalled a change in the campaign against the group.

“At least 10 senior commanders of the group have been killed among countless other fighters in Idlib province,” she said.

“This raises the question of whether there is a change in policy, or if there’s more intelligence coming in from the ground pin-pointing where these leaders are.”

READ MORE: Why are thousands of Iranians fighting in Syria?

In a separate development, the Islamic State of Iraq and the Levant (ISIL, also known as ISIS) demolished two monuments in the ancient city of Palmyra a month after recapturing it from government forces.

Maamoun Abdulkarim, Syria’s antiquities chief, said on Friday that ISIL destroyed the tetrapylon – a 16-columned structure that marked one end of the ancient city’s colonnade.

“Yesterday [Thursday] we received satellite photographs from our colleagues at Boston University showing damage to the facade of the Roman amphitheatre,” he told AFP news agency.

“This destruction is a new war crime and an immense loss for the Syrian people and for humanity.

“This new blow against cultural heritage – just a few hours after UNESCO received reports about mass executions in the theatre – shows that cultural cleansing led by violent extremists is seeking to destroy both human lives and historical monuments in order to deprive the Syrian people of its past and its future,” Bokova said.

Before being forced out of Palmyra in a Russian-backed offensive in March last year, ISIL carried out a campaign of destruction at the city’s UNESCO-listed world heritage site, razing treasured temples and towers tombs.

The Syrian conflict started as a largely unarmed uprising against Assad’s rule in March 2011. It has since morphed into a full-scale war that has left hundreds of thousands dead and more than half of the country’s prewar population displaced inside and outside of Syria. 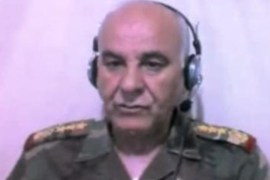 Members of the Free Syrian Army denounced a visit by a former rebel commander to Russia.