Turkey has deported a correspondent with The New York Times as he tried to enter the country through Istanbul’s Ataturk Airport, according to the newspaper.

Rod Nordland was sent back to London, from where he had flown out, on a flight from the same airport on Tuesday, the report said.

There was no immediate statement from the Turkish authorities. Turkish officials contacted by Al Jazeera on Wednesday declined to comment or said that they did not have any information.

Dean Baquet, executive editor of The New York Times, denounced the deportation as unjustified and an affront to press freedom, according to the newspaper.

It appeared to be the first time a New York Times correspondent had been denied entry to Turkey, David McCraw, the news organisation’s vice president and deputy general counsel, said.

Various Turkish media reports said that Nordland was denied entry into Turkey for writing “pro-Kurdistan Workers’ Party (PKK) articles” in the past.

Turkey’s more than 30-year-old conflict with the PKK reignited in the summer of 2015 after a ceasefire declared a year and a half earlier faltered and peace talks between the two sides collapsed.

Many people, including leaders of Turkey’s pro-Kurdish party, have been arrested in recent months for alleged links to the PKK, which is seen as a “terrorist organisation” by Turkey’s Western allies.

Various foreign journalists have been detained in Turkey, mostly briefly, while covering stories on the Kurdish issue. 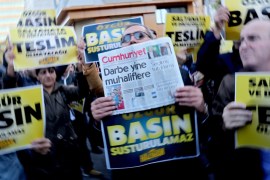 At least 12 Cumhuriyet employees affected by decision described by government as arising from probe launched in August. 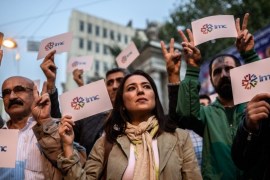 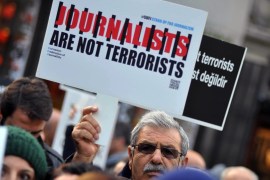 We explore the government’s clampdown on critical media; plus, we talk to Can Dundar, a journalist released from jail.