West African leaders are to head to Gambia to persuade President Yahya Jammeh to hand over power after his election defeat last month, according to Nigeria’s foreign minister.

The decision came as West African leaders met in Nigeria’s capital, Abuja, to decide on next steps in their mediation of the Gambia’s political crisis.

Wednesday’s meeting would “discuss with President Jammeh the imperative to respect the constitution”, Onyeama said in a statement.

He said the talks “agreed on the determination to resolve the Gambian political crisis in a manner that at every step of the way conforms with the constitution … and respects the will of the people of The Gambia”.

Those involved in the crisis talks were concerned over worsening security, including a crackdown on the news media, which has seen a number of radio stations taken off the air.

Jammeh, a former coup leader who has ruled the country for 22 years, initially accepted his defeat by opposition figure Adama Barrow in the December 1 election.

But a week later, he reversed his position, threatening to hang onto power despite a wave of regional and international condemnation.

Diplomats are concerned the impasse over the poll could escalate quickly into violence.

Separately, Jammeh fired 12 ambassadors after they called for him to step aside and allow Barrow to take power, a foreign ministry source told AFP news agency on Monday.

Gambia’s ambassadors to China, Britain, Turkey, Senegal, and the US, as well as the country’s permanent representative to the UN, were among those sacked after sending a letter asking Jammeh to leave in late December.

“The Gambia government has recalled 12 ambassadors after terminating their services,” the source said on condition of anonymity.

“I do not know why President Yahya Jammeh terminated their services, but I can tell you that these are the ambassadors that congratulated and endorsed President-elect Adama Barrow for his election victory.” 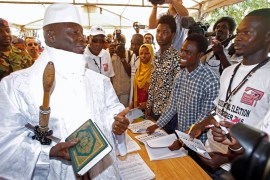 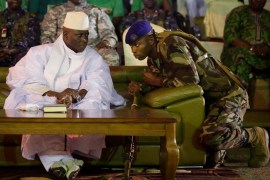 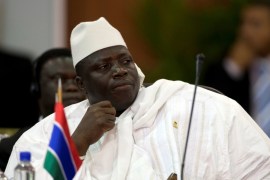