Tens of thousands of Nepal’s opposition supporters have marched in the capital Kathmandu against a move to amend the country’s controversial constitution.

Waving party flags and banners, supporters of the Communist Party of Nepal (Unified Marxist-Leninist) participated in Friday’s rally, which began at dozens of locations in the capital and converged at an exhibition complex in the centre of the city.

Opposition leader Khadga Prasad Oli warned of a “wave of protests” in a show of strength by the main opposition party and its eight partners, a month after the country’s government proposed to amend the 2015 constitution to address the demands of ethnic Madhesis, an indigenous group who say that it is discriminatory.

Madhesi protesters rose up against the constitution in 2015, leading to months of unrest and clashes between police and demonstrators in December, that killed more than 50 people.

A two-thirds majority is required to pass the proposed amendment, but the opposition has obstructed the parliamentary sessions in a bid to prevent the move.

Oli, a former prime minister and chairman of the opposition party, vowed not to allow the passing of the amendment bill in parliament.

“We will spread this wave of protest across the country. We will not allow the government to approve the amendment, which is against our country’s interest,” he said.

Born in eastern Nepal on February 22, 1952, Oli  became a member of the Nepal Communist Party in 1970 after being influenced by local communist leaders as a teenager.

Nepali parties negotiated for years over a new constitution. Hopes that the charter would usher in an era of political stability after it entered into force on September 2015 have, however, been dashed. 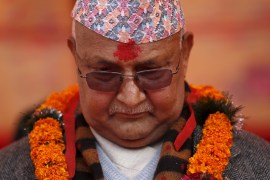 Oli swept into power in 2015 but has faced fierce criticism over his handling of protests in the impoverished nation. 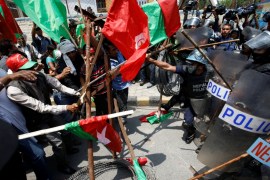 Demonstrators in Kathmandu demand federalisation but many believe it is tantamount to fragmenting the country.