A French council sent police officers to a primary school to protest about its decision to offer optional Arabic language classes to pupils.

Local news outlet La Chaine Info (LCI) said the deputy mayor of Six-Four-Les-Plages had confirmed that officers were sent to the Reynier primary school twice in November to inform school officials of the mayor’s opposition to the lessons.

Jean-Sebastien Vialatte told LCI that officials were concerned that the class, which was being held outside school hours, was not agreed to by the local council in the Var district of southern France.

Vialatte also told the outlet that officials had reservations about the teacher, who was not a state employee.

Information about the incidents came to light on Wednesday after a French lawyer shared court documents exposing a failed legal suit by the council to halt the classes .

In September, an image shared on social media by a parent of one of the children at the school falsely claimed the classes were mandatory, prompting outrage in France, amplified by populist parties.

Sharing the inaccurate claim on his Facebook page, Frederic Boccaletti, a local politician and member of the far-right National Front (FN), blamed “friends” of the Moroccan-born Minister of Education Najat Vallaud-Belkace, for forcing the lessons on French children.

He went on to accuse Vialatte of being complicit in allowing the classes to proceed.

The incidents come amid a climate of tension in France over its Muslim minority, composed mainly of immigrants from North Africa and their descendants.

Some schools have also removed options for pork-free school dinners that Muslim pupils usually opt for.

A campaign of bomb, gun, and knife attacks, by the Islamic State of Iraq and the Levant (ISIL) group has also helped harden French public opinion on Muslims.

The French government says that it is acting to preserve the secular character of the country.

Hollande: France has a problem with Islam

“Sending the police to make sure an Arabic class isn’t held shows how much hate government institutions can express for Arabs,” Louati said.

“In 2015 we had cases of primary school children being humiliated, assaulted, and even taken to the police by their teachers .

“Then we had schoolgirls being barred from school for wearing a long skirt or the prohibition of substitute meals for Muslims and Jews.”

Louati said senior officials had done little to address the problem and had often acted to encourage such views, referring to government minister Laurence Rossignol’s comments last year, where she compared Muslim women who wore the hijab to “American negroes” who supported slavery.

“The only solution for French Muslims and any citizen who loves justice and equality is to band together and engage in a power struggle with decision-makers,” he added.

“The upcoming presidential and parliamentary elections are an opportunity … nobody benefits from a society built on hate.” 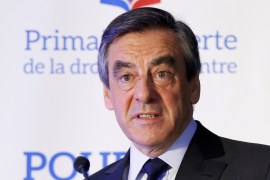