A federal judge is set to deliver a key ruling on the four-state Dakota Access Pipeline that has drawn thousands of protesters to a construction site in North Dakota in recent weeks.

US District Judge James Boasberg said he will rule by the end of the day on Friday on the Standing Rock Sioux tribe’s request to block the $3.8 billion project, which will carry oil from North Dakota to Illinois.

The tribe argues the project could contaminate local water supplies and has already disrupted sacred sites.

Dallas Goldtooth, a spokesperson for the Indigenous Environmental Network, told Al Jazeera that spillage from the pipeline would be inevitable.

The 1,172-mile project, launched in 2014, would carry nearly half a million barrels of crude oil daily from North Dakota’s oilfields through South Dakota and Iowa, before reaching an existing pipeline in Patoka, Illinois, where shippers would be able to access Midwest and Gulf Coast markets.

Pipeline supporters claim the project is an opportunity to not only reach other markets, but also to reduce locomotive traffic that has been a rising concern in the region following a spate of fiery train derailments carrying crude from North Dakota.

A separate lawsuit filed on Thursday by the South Dakota-based Yankton Sioux Tribe challenged the US Army Corps of Engineers’ decision to grant permits for the pipeline’s construction.

Tribal officials fear that in addition to water contamination, the underground passage would break federal laws under the National Historic Preservation Act that protect sacred prayer and burial sites.

“There’s a spirit wakening where our kids are going to find their way back to these sites. But if these sites are destroyed and gone, it’s all for nothing. So that’s the most important thing. For future generations to connect with who we are,” David Archambault II, the Standing Rock Sioux tribal chairman, told Al Jazeera.

READ MORE: US tribes angered by sale of sacred site

Several dozen protesters, including Archambault, have been arrested in recent days for chaining themselves to construction equipment or otherwise trying to block the work, and the National Guard has been called in to help maintain the peace.

But Achambault, the tribal official, is adamant that the legal battles will continue regardless of the court’s ruling. 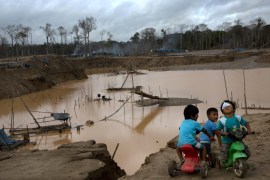 Communities told not to eat fish after pipeline burst pours 3,000 barrels of crude oil into Chiriaco and Morona Rivers. 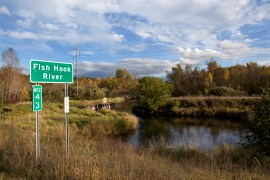 Activists pipe up against US oil-transport plans 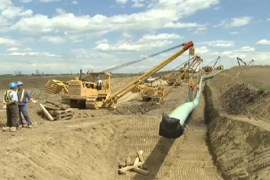