Corruption claims have hit nearly 60 paradise island lease deals in the Maldives, but few have a story like the island of Maagau.

Its characters include the Italian distributor of Penthouse, a Maldivian gangster and a vice president, now jailed on corruption charges. It has entangled an Auditor General, now fired and facing numerous death threats. At its heart are several unusual payments for about $2.5m.

Unravelling what really happened is complicated, but some facts are clear. The Maldives government leased the island of Maagau in 2014. Next year, Baglioni Hotels, which sub-leased the island this year, will open a five-star resort under the slogan, “Paradise with Italian grace”. Ninety-nine water bungalows and a “jungle spa” are being built.

What is not clear is why on May 26, 2014, the Italian media tycoon who won the lease paid $2,249,913 to a company majority-owned by the family of the Tourism Minister. He says he was paying an acquisition fee for the island under instructions from the Tourism Ministry. 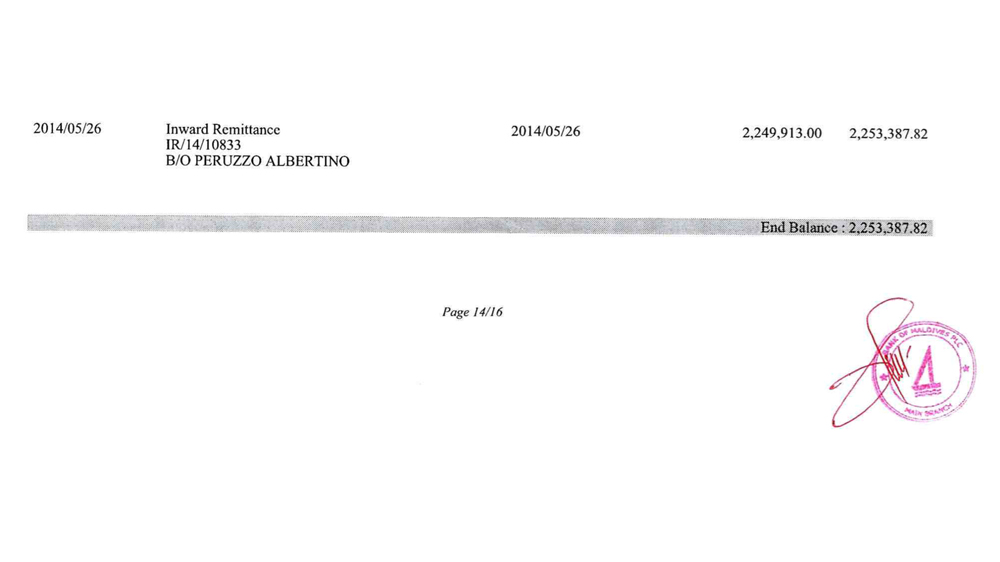 But another businessman also says he paid the acquisition fee directly to the government. Official records show the payment.

So either they paid twice or something else took place. “Corruption suspected,” read the Auditor General’s report, after he investigated.

Also unclear is how the lease was granted when it broke the law. Maagau was neither rented through a joint venture with the government, nor with an open bidding process. In theory, they are the only ways an island can be leased under Maldives law, but somehow rights were granted. Again, corruption is suspected.

Alberto Peruzzo built one of the largest publishing empires in Italy, before handing it over to his son Alessandro. Peruzzo Multimedia distributes hundreds of magazines and books, from Penthouse to The Art of Drinking.

Verified bank records obtained by Al Jazeera’s Investigative Unit show that an Albertino Peruzzo transferred nearly $2.25m to a company majority-owned by the family the former Tourism Minister on May 26, 2014.

Peruzzo says he and his company “have nothing to do with any bribe or with any other illegal action” and that, if any illegal action occurred, they were the victims rather than the perpetrators. He maintains that he paid according to the directions provided by the Ministry of Tourism and Maldives Marketing & PR Corporation (MMPRC), which issued a receipt and the lease for Maagau.

Peruzzo says that he later transferred the lease to Tosi and took a stake in Tosi’s company New Mood Resorts.

New Mood then made a deal with hotel chain Baglioni and began work on a resort that will be managed by Tosi.

The Italian trio, Peruzzo, Tosi’s New Mood and Baglioni, had got a bargain. The island acquisition fee was $2.5m. Even if you add the mysterious second payment of $2.5m, that is still only half price, assuming you accept the former Auditor General’s estimate that Maagau could “easily fetch up to $10m”.

In 2014, Ahmed Adeeb was minister of tourism, with the authority to decide Maagau’s price and purchaser. He rose to become vice president before being arrested and jailed on corruption and terrorism charges. Al Jazeera has received more than 10 gigabites of data from three of his iPhones, including hundreds of thousands of text messages.

They show there was another person involved in the Maagau deal, Ahmed Nasheed, who goes by the name of “TC Dave”. Several sources have told us that he is a gangster, but he is currently Commissioner of Sports. Back in 2014, he was an official at Maldives Ports Limited, making it hard to understand what role he played and why.

In August 2014 Tourism Minister Adeeb sent TC Dave a photograph of a tweet that leaked details of the Maagau lease. It was in the Maldivian language, Dhivehi, and said: “Breaking: Andrea Tosi paid for the fraudulent deal for Maagau, Dhaal atoll through State Bank of India in two payments. The first one was US$2.5m for the gov and US$2m went to the minister’s account.”

Adeeb accused TC Dave of being responsible for the tweet:

Bro tossi or ur guys are giving thiS info

I cald my brother. He swears he ddnt tel anybody.

Later texts suggest there was a dispute between Tourism Minister Adeeb and the chief executive of New Mood resorts, Gianandrea Tosi. The minister and the businessman were in direct contact.

please arrange an extension for the deadline of sept the 18th for the master plan.please write me here for any news.best regards.Tosi

P.S. Till waiting for your trip details for Europe

It appears New Mood was under a deadline to carry out a survey, but had been unable to do so because local people had “installations” on the island that needed to be cleared. Tosi contacted Adeeb and begged for a deadline delay. When it did not come, he issued a warning that he was ready to take legal action.

Bro.. Tossi z hiring a lawyer tomorrow. A single txt wud b fruitful i guess.

Adeeb’s secretary sent him a text message on the same day saying, “Mr Tosi is here for a meeting with you”. After that, the correspondence stopped. It appears Tosi got what he wanted.

There is more than just a suspicious payment to a private company, a gangster middleman and a jailed minister. There is also the case of a forged letter from New Mood resorts.

It appears not to be part of the crime, but the cover-up. During Minister Adeeb’s embezzlement of $80m of Tourism Ministry funds, he transferred around $2.5m to his uncle. The Auditor General, Niyaz Ibrahim, noticed the transaction and began asking questions.

In an attempt to cover his tracks, Adeeb claimed that New Mood resorts had paid back $2.5m to the government on behalf of his uncle. Adeeb provided a forged letter that appeared to be from New Mood as proof and hoped it would explain away the missing money.

When New Mood told the Auditor General that the letter was a forgery, Adeeb turned instead to a pair of corrupt police officers: “u guys need to focus on this auditor general,” he wrote to them in August 2014. They agreed and put Niyaz Ibrahim under surveillance.

“Blast it at any cost”

Abdulla Didi, of the Special Operations section of the Maldives Police Service, replied: “its on. n he is under survailence.” His colleague, Saif Hussain, had also been spying on the Auditor General.

“We checked that place. Lots of camera everywhere. Nt police . Mndf op is there. Hep office op. Cos the place is in red zone. Detail planning needs to be dne”

Tourism Minister Adeeb was impatient. He wanted the case to go away as soon as possible. He replied, “Ok but need to blast it at any cost.”

‘sure.lets do it.’ came the reply from Didi.

Niyaz Ibrahim was shocked when he read the text messages shared between the tourism minister and secret police. He labelled their activities “state sponsored terrorism”.

“How can they do this?” he asked. “Such a dirty government. I never imagined these things were going on at this level.”

After releasing his report, Niyaz Ibrahim was dismissed from his role as Auditor General. He was replaced by the brother of one of the senior officials who helped Adeeb embezzle millions of dollars.

Baglioni Hotels told Al Jazeera that it is not aware of any corruption in relation to the island deal.

Gianandrea Tosi said New Mood Resorts say they have always been compliant with the laws and regulations of the Maldives and have never been involved in any illicit or illegal activities. They add that the relevant authorities in the Maldives have undertaken an investigation into the alleged issues and have not found any irregularities or wrongdoing on the part of New Mood Resorts.

Alberto Peruzzo says that he and his company “have nothing to do with any bribe or with any other illegal action”. He maintains that he paid according to the directions provided by the Ministry of Tourism and Maldives Marketing & PR Corporation, who issued a receipt.

Peruzzo added that any payments had the sole purpose of acquisition of the head lease for the island of Maagau. He stated that his company now owns a 38 percent stake in New Mood Resorts.

Ahmed Adeeb denies any wrongdoing. Abdulla Didi and Saif Hussain did not respond to requests for comment.