Kofi Annan, the former UN chief, has been given a hostile welcome by local Buddhists in Myanmar’s western Rakhine state where he will investigate the religious conflict that has displaced tens of thousands of Muslim Rohingya people.

Annan has been entrusted by Aung San Suu Kyi, the leader of Myanmar’s new government, with the task of finding ways to heal wounds in the bitterly divided and impoverished region.

Hundreds turned out on Tuesday morning as Annan landed at Sittwe Airport to make clear that he was not welcome.

Many booed and shouted “No Kofi-led commission” as his convoy left the state capital airport, holding signs reading “No to foreigners’ biased intervention in our Rakhine State’s affairs”.

Annan, who has promised to be impartial in his approach to the conflict, is expected to meet Rakhine leaders as well as visit camps where tens of thousands of Rohingya languish in punishing poverty.

However, the region’s largest political group, the Arakan National Party, has already ruled out meeting Annan.

Members of the nearly one-million-strong Rohingya community are largely denied citizenship and the government does not recognise them as an official ethnic minority.

Their appalling living conditions, including heavy restrictions on movement, have led tens of thousands to flee, many via treacherous sea journey south towards Malaysia.

Last week, Ban Ki-moon, the sitting UN chief, called on Myanmar to grant citizenship to the the group and respect their right to self-identify as Rohingya.

However, the issue remains sensitive to local Buddhists.

Rakhine, which borders Bangladesh, has been scarred since 2012 by bouts of communal violence between ethnic Rakhine Buddhists and a minority Muslim population.

More than 100 people have been killed – the majority Muslims – while tens of thousands of the stateless Rohingya group have spent the past four years trapped in displacement camps with limited access to health care and other basic services.

Aung San Suu Kyi has dealt gingerly with the issue since coming to power in March, drawing criticism from rights groups, which have urged her to use her moral weight to alleviate the Rohingya’s plight. 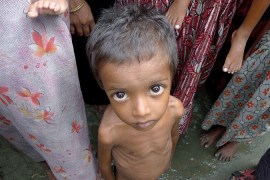 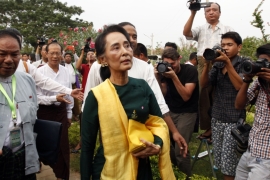 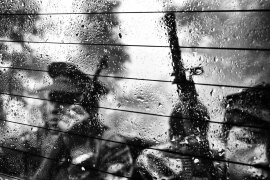