Hundreds of Syrian refugees have left Turkey for the Syrian town of Jarablus, according to Turkish officials, in the first wave of civilian resettlement since the launch of an Ankara-backed incursion into northern Syria two weeks ago.

More than 250 Syrians, including women and children, arrived at a sports complex in the Turkish border town of Karkamis for registration early on Wednesday, Turkey’s state-run Anadolu agency said.

After the registration process, they went through security checks before crossing into Syria through the border gate at Karkamis, the agency said.

Huseyin Rustem, a Syrian refugee who had been living in Turkey’s southeastern Gaziantep province for more than a year, said he was “excited to go home.

“My home is now cleansed from terror, that’s why I am going back,” he told reporters in Karkamis before his departure for Jarablus.

“I missed my parents. My whole family is still there. I was all alone here.”

Speaking to Al Jazeera on Wednesday, a senior Turkish government official said that “Syrians will continue to return to their country”.

A spokesman at the governor’s office for Gaziantep province, which lies across the border from Jarablus, also confirmed the civilians’ departure.

“The formal returns have begun today,” the spokesman told Reuters news agency. “This is the first time since the operation began.”

Saif Abu Bakr, general commander of the Hamza Division, a rebel faction affiliated with the Turkish-backed Free Syrian Army (FSA) fighters, told Al Jazeera that “approximately 250 to 300 civilians, including men women and children, were transported back across the border” at about 5pm local time.

“They were all originally from Jarablus,” he said, adding that all the returnees wanted to go back home

“There was no pressure from the Turkish side,” Bakr said from Jarablus. “They asked to go back to their homes.”

Bakr said that all families from Jarablus, approximately 10,000 civilians, were now expected to be brought back to their hometown in the near future.

Jarablus had been controlled by the Islamic State of Iraq and the Levant group (ISIL, also known as ISIL) for almost two years until it was captured by Turkey-backed Syrian rebels in a cross-border offensive launched on August 24.

Turkish President Recep Tayyip Erdogan previously said that Turkey’s cross-border offensive into Syria was aiming to give people who fled ISIL-controlled areas a chance to return to their homes as well as securing the Turkish border.

“Jarablus has been freed,” he told a rally in Gaziantep two weeks ago. “Anyone who wants to go back to Jarablus will be given any support they need from us.”

Turkey has absorbed some 2.7 million Syrian refugees within its borders since the start of civil war in neighbouring Syria.

Speaking to reporters aboard a plane as he returned from a G-20 meeting, Erdogan said that the issue had been brought up by US President Barack Obama during the summit in China.

“Obama wants to do some things jointly concerning Raqqa,” Erdogan said. “We said this would not be a problem from our perspective.”

His comments were reported by the Hurriyet daily and several other Turkish newspapers on Wednesday.

Erdogan also said Turkish and US military officials could meet to discuss the issue, according to Turkish media.

Washington has not yet commented on Erdogan’s remarks. 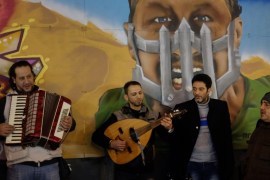 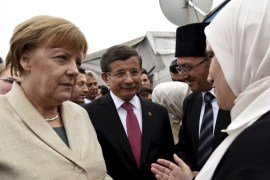 German chancellor on a visit to Turkey says “refugees will have more opportunities near their home”.