Srinagar – Indian-administered Kashmir has been in turmoil since July 8 when rebel commander Burhan Wani was killed by Indian security forces.

More than 70 people have been killed and thousands wounded in the ensuing unrest, including hundreds with serious eye injuries from pellets guns fired by Indian security personnel, who have faced criticism for using excessive forces against the protesters.

The disputed region has mostly remained under a curfew since the unrest began.

An all-party delegation from New Delhi concluded a recent visit to the Himalayan region but no breakthrough could be reached on how to end nearly two months of deadly violence.

Al Jazeera spoke to Parvez Imroz, a leading human rights activists in the Kashmir valley, about the situation in the region.

Al Jazeera: How do you see the Jammu and Kashmir state government’s handling of the widespread protests in Kashmir following the killing of Hizbul Mujahideen commander Burhan Wani?

Imroz: Everything is controlled by the police and Central Reserve Police Force (CRPF) [paramilitary forces] on the streets here. The state government looks isolated as more Border Security Force (BSF) troops have been called in.

The state government doesn’t seem to have any say in the decision making. They’re struggling to have some face saving now, given the rising number of deaths and pellet- and bullet-injured people.

It is the Indian home ministry and defence ministry that is controlling things here and calling all the shots.

Al Jazeera: How do you see the role of Jammu and Kashmir Chief Minister Mehbooba Mufti?

Imroz: The present civilian uprising and widespread protests are beyond the expectations of government here. After [the] 2010 uprising, with the passage of time, the anger intensified. And it has been an unexpected uprising this time around.

The only fear [the] government of India had was that they never wanted people to come out in large numbers on the streets in Kashmir like they did in 2008 and 2010. But it’s happening again.

The politicians of ruling and opposition parties are also making contradictory statements, which further damages their credibility among people in Kashmir.

Al Jazeera: How is the current uprising different from the 2008 and 2010 mass protests?

Imroz: It can be seen as a continuation of the 2008 and 2010 uprisings. About 600,000 troops are not here to fight a few hundred militants but to control the population.

The People’s Democratic Party-Bharatiya Janata Party (PDP-BJP) coalition government has been on the offensive here since it came to power with agendas such as proposed Sainik [army] colonies, separate townships for [displaced] Kashmiri Pandits etc.

People here had a feeling that the local PDP party in coalition with Hindu nationalist BJP had decided to go ahead with their divisive plans and policies.

Also, the treatment meted out by the BJP government to minorities elsewhere, including Muslims, weighed heavily on the minds of people here. The jingoistic corporate media further angered people here.

Al Jazeera: Do you think the prolonged period of curfews, snapping of mobile and internet services and other restrictive measures enforced by the government has further angered people?

Imroz: The more restrictions are enforced, and the more army and other paramilitary forces are called in, it is in a way the success of people’s struggle here.

The government doesn’t really know what to do and how to control protests.

The state has become more vehement, firing bullets and pellets on unarmed people. But, despite all this use of force, people are organising these protests well, which was not the case in the early 1990s.

It was more of an emotional outburst back then.

And many young people who are now on the streets have not seen the fear and terror that was instilled by the government forces in early 1990s.

Now that element of fear is gone.

Al Jazeera: What do you think has been the government’s response to the protests?

Imroz: The Indian troops here have realised that they are working in a territory where people are hostile to them and they are seen as an occupation forces.

And there is no accountability for them when they are involved in human rights violations here.

Lot of inquiries and probes were ordered in the past but then nothing happened.

Here the army, CRPF, and police force is convinced that they will get away after shooting bullets and pellets at unarmed people.

They have appointed commission of inquiries in the past for human rights violations but finally nothing substantial came out of those enquiries.

On the contrary, those involved in human rights abuses and killings in Kashmir have been rewarded and awarded by the state.

Al Jazeera: The CRPF recently informed the High Court that there will be more fatalities if pellet guns are banned. Do you think the use of pellet guns in Kashmir should be completely stopped?

Imroz: This is not logic to say that had they not used pellet guns, there would have been more deaths. What kind of logic is it?

The number of injured is over 8,000 people till now and their numbers are rising with every passing day. And these people are crippled and will never be the same again.

At JKCCS, we have been documenting cases of previous torture and injured people. Many of these people later die, succumbing to their injuries.

I know a lot of tortured people who after five or six years of treatment died after going through painful and unsuccessful treatment for years.

Recently, the images of an injured and bloodied Syrian boy shocked the entire Europe. But when a 14-year-old Kashmiri girl, Insha Malik, was blinded in both her eyes by pellets, it did not rock the conscience of people and civil society in India.

Al Jazeera: How significant is the proposed visit by UN rights body chief and what should be expected of UNHRC team’s visit to assess the human rights situation in Kashmir, if they are allowed to visit by the government?

Imroz: People and governments in other countries are getting to know about the undemocratic ways of [the] Indian state in Kashmir. And the recent attacks and sedition charges on international humanitarian organisations like Amnesty International India are also taken note of.

The image of the Indian state that is going out to the world is that of a right-wing, undemocratic state.

Sartaj Aziz [foreign affairs adviser to the the Pakistani prime minister] has welcomed UNHRC to Pakistan, but India has denied them access to Kashmir. Earlier India also did not allow the special rapporteur on enforced disappearance and torture to visit Kashmir.

Pakistan, on the other hand, has allowed them [the UN] access.

In 2008, the EU passed a resolution when mass graves were found in Kashmir, but [the] government of India rejected it.

The Indian government is obsessed with sovereignty. They feel even the “K” word cannot be discussed.

I think India will not allow [the] UNHRC team to visit Kashmir as it will further internationalise the Kashmir issue.

Even the International Committee of the Red Cross presence in Kashmir is limited to visiting a few detention centres once in a while, and that is it. They can’t work on issues of disappearances, torture and missing people here.

In other countries, ICRC has even excavated mass graves, but they are not allowed to work on such issues in Kashmir.

Al Jazeera: How do you see the situation emerging from here?

Imroz: The use of force against protesters is likely to continue. But one thing is certain – this uprising has given [a] new dimension to the resistance in Kashmir.

The young generation is really controlling things on the streets.

In [the] 1990s, and even till early 2000, some people from here would go and openly talk to the Indian government on behalf of people, but that can’t happen now because people here have realised nothing comes out of these talks.

But it remains to be seen how young people leading the protests will organise themselves and lead the struggle in the times ahead. 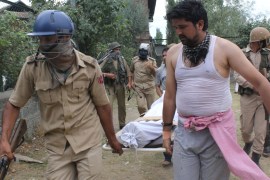