Displaced civilians and religious leaders in wartorn South Sudan appealed to the UN Security Council on Saturday to urgently deploy extra foreign troops as government ministers questioned whether more peacekeepers were needed in the capital, Juba.

The 15-member council met with President Salva Kiir’s cabinet, religious and civil society leaders and visited two UN compounds in Juba where tens of thousands of civilians have been sheltering amid nearly three years of violence.

While the country’s conflict was sparked in December 2013 by political rivalry between Kiir and opposition leader Riek Machar, Anglican Archbishop Daniel Deng warned that “people have been made to believe it’s a tribal war.

“What happened in Rwanda – we’re afraid it can happen in this country,” he told the Security Council, referring to the Hutu genocide of Tutsis and moderate Hutus in 1994.

“We need this help,” he said. “We cannot put our nation on the right track alone.”

South Sudan gained independence from Sudan in 2011 but slid into civil war after Kiir sacked Machar as his vice president. The conflict between forces loyal to Kiir, an ethnic Dinka, and Machar, a Nuer, has often followed ethnic lines.

The pair signed a peace deal a year ago but fighting has continued and Machar has now fled to neighbouring Sudan.

After a meeting between the council and Kiir’s cabinet, US Ambassador to the United Nations Samantha Power said the cabinet ministers had asked “whether the regional protection force was still needed given that Riek Machar has fled the country, given the transitional government is working more smoothly.

“We as a council sent an unequivocal message that ‘yes, this force is still needed’,” she told reporters. The Security Council has threatened to impose an arms embargo on South Sudan if the government does not cooperate.

The new force will boost a 12,000-strong UN peacekeeping force that has been on the ground since 2011. When the conflict erupted in 2013, the United Nations took the rare step of sheltering civilians at several of its compounds.

UN peacekeepers currently protect nearly 200,000 civilians at six sites around the country. The Security Council, which visited two camps in Juba on Saturday, were greeted at the UN House site by mainly displaced Nuer shouting “Down, down, Salva Kiir.”

“We need your help, we are tired,” said Peter Gatkuoth, 23, who has sheltered at the UN House site for several years.

The South Sudan conflict has been marked by the use of rape as a weapon and some displaced women told council members on Saturday that they had to risk being the target of sexual violence every time they left the camp to get food and firewood.

Oil producer South Sudan’s fledgling economy has been battered by the conflict, driving prices higher and leaving half the country’s 12 million people without enough food.

Paleki Ayang, director of the South Sudan Women Empowerment Network, told the council her monthly salary had dropped from $2,000 more than two years ago to $80.

“If somebody is hungry you can’t preach to them about peace agreements,” she said. 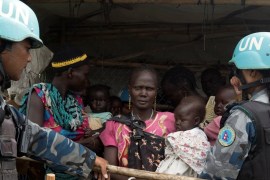 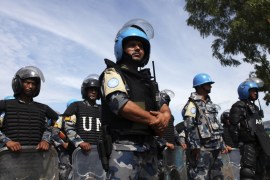 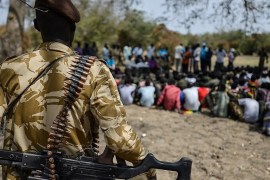